The Spirit of Rocky Horror: It’s not just a show 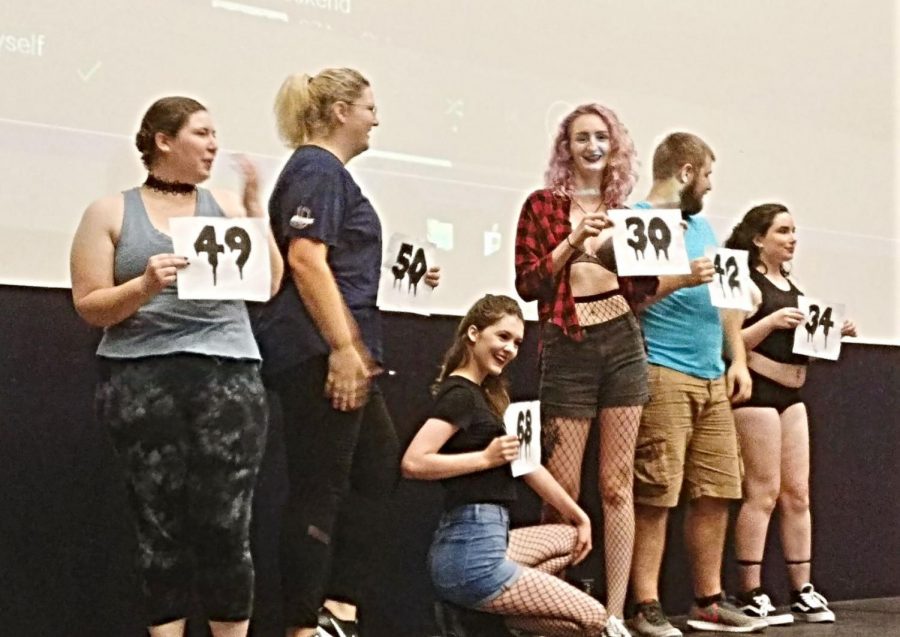 Several auditioners return to the stage with their numbers before the next competition. Over 83 people went through a rigerous process to find the best people for the parts for the zany and memborable rolls of Rocky Horror.

It’s always important to come dressed for an occasion. For auditioners of the annual “Rocky Horror Picture Show,” such a wardrobe usually consists of an array of lingerie, fishnets and pasties.

Inside the Russell Union Theater, 83 people, the largest turnout of Statesboro’s 11-year run, auditioned for the roles of “Rocky Horror’s” zany and mostly scantily-clad characters, as well as Transylvanians and crew members.

However, the mood inside the theater was hardly competitive. There were no rivalries over parts or cut-throat glares from across the aisles.

From a man with a snake named Sesame to a former Marine wanting to embrace the weird, each and every person who wished to be a part of the experience only expressed acceptance and excitement for what has been a magical event for more than 10 years.

The original science fiction musical comedy was panned by critics during its initial release in 1975, but it soon gained new life as a midnight movie. It has since gained a large international cult following to the point of being selected for preservation in the United States National Film Registry in 2005.

“Rocky Horror” planted its silhouettes in Statesboro in 2007 and has since dazzled and confused audiences of all ages. It was originally held on campus at the Russell Union Theater before the people running it graduated. Robert Faller, technical director of the Averitt Center for the Arts, was able to move the show to the Averitt Center, where it has been ever since.

“We have faced possibilities in past years of being cut from the schedule, but it’s less about the content of our show and more about that it’s an expensive show to put on,” Megan Bowen, director of “Rocky Horror,” said. “We keep the ticket prices really low so that students can come because we think it’s really important.”

Half of the profits from the production goes toward copyright permission to show the movie, said Bowen. To afford costumes and new props, the cast has a GoFundMe account set up to outreach donations from the public. Their current goal is $1,000.

The Pride of the LGBT+ community

Bowen said that while many people come out  to the show because of their love for the movie, the performance holds a deepening meaning for its audience, especially the LGBT+ community.

“We get up on stage, we yell about how gay we are, and everybody cheers,” Bowen said. “It’s pretty magical for the cast and crew who are part of the LGBT+ community to feel like they’re not being judged. They’re being celebrated.”

Charlie Bowen, who previously played the role of the sinister scientist Dr. Frank N. Furter for seven years, agreed that the show brings a sense of community to the LGBT+ community in Statesboro each year.

“I’m glad that the LGBT+ community has embraced it, and likes and uses it as an opportunity to come out in a large group together and feel comfortable and safe in our small, southern town,” he said.

Megan and Charlie met during a past showing of “Rocky Horror” and have been together ever since.

Charlie Bowen stepped down as the role of Frank this year and will now play the criminologist – the narrator and expert in “Rocky Horror.”

The worst type of scare

Megan Bowen said that with this version of the show being in the Bible belt, reactions are not always well-received.

In 2017, the cast of “Rocky Horror” reserved the Russell Union one Sunday for a rehearsal.

“People showed up in their costumes and we had decided to take some pictures on campus before the Union opened,” Bowen said. “Someone passing by didn’t like it and called university police.”

Bowen said that the first officer who responded said they were responding to the call they received and that everything was fine. However, the officer’s supervisor entered the scene and insisted that the cast shouldn’t be at the Union dressed as they were.

“We were essentially told that if we did not leave or go inside, which we couldn’t because the Union wasn’t open yet, we would be kicked off of campus,” Bowen said. “We found an open building on campus to wait in for 15 minutes until the Union opened.”

Bowen said that the incident was pretty terrible and that some cast members were pretty shaken over the whole thing.

Alicia Weathersby, an undeclared freshman, said she learned about “Rocky Horror” when she took a theater appreciation class.

“I love the people, love the vibes,” Weathersby said. “I really want to be on stage performing, but I don’t care if I’m a main role or a Transylvanian. I just want to be in it.”

Weathersby said regardless of what part she receives, she still wants to try out for “Rocky Horror” next year.

“I never really got to be involved in high school like I wanted to because of confidence issues,” Weathersby said. “But now I’m in college, and I want to be a bad bitch.”

Sean Oakes, a non-traditional freshman writing major, said that he was introduced to “Rocky Horror” by a navy foreman during his time in the Marine Corps.

“I was on deployment and he told me I had to watch the movie,” Oakes said. “I got hooked immediately.”

Oakes said that “Rocky Horror” has not only inspired his major but also inspired him to live his life as an outlier.

“The movie was ahead of its time when it came out in ’75,” Oakes said. “It’s such an outlier. That’s sort of how I want to base my life, not be somebody who’s in the crowd.”

Despite the incident with campus police, more than 100 people came to the 2018 “Rocky Horror” auditions. The event lasted most of the Saturday afternoon, and auditioners spent it singing songs from the movie at the top of their lungs, comparing outfits and supporting each other in all their unique glory.

Such a display of love and acceptance is truly what sums up the spirit of “Rocky Horror” and what productions all around the country try to represent.

“Rocky Horror” will invade the Averitt Center for the Arts Oct. 26 and 27. Those who wish to see the cult classic on stage should buy their tickets as soon as possible, as they sold out before the start of the show last season.