Brinson ready for spotlight and to continue making statements 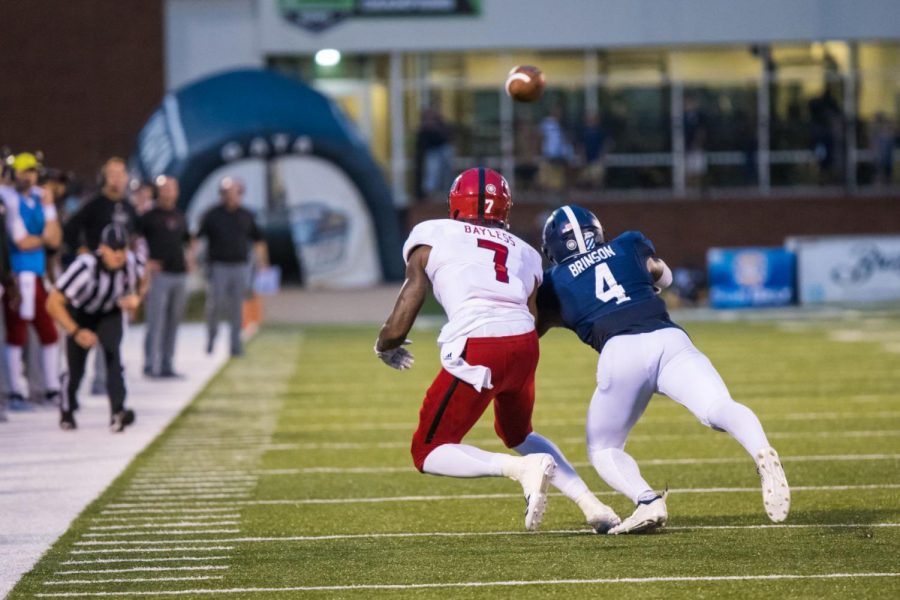 Junior cornerback Monquavion Brinson breaks up a pass in the Arkansas State game.

Coming off of a big win against a team that was predicted to win the Sun Belt, several players rose to center stage. One of the players that stood out Saturday was junior cornerback Monquavion Brinson.

As a true freshman, Brinson played in all 12 games and started for seven. He finished his first year with 25 total tackles and three pass breakups. Brinson had a career-high of seven tackles against Arkansas State.

His freshman year was one of success and growth, but the next season would bring more to the table. Although GS had a season of ups and downs in 2017, Brinson made moves.

Brinson played and started in every game and was selected for the All-Sun Belt Conference second team. This spot was secured due to his five recorded interceptions, 34 tackles and 12 pass break-ups.

This year, Brinson has been named as a player for the All-Sun Belt Conference first team for the pre-season. In just four games, Brinson leads the Sun Belt in solo tackles, 11 of them during last week’s game alone. His success on the field has only grown from his experience and ability to learn from past plays.

During the game against ASU, Brinson stood out with four pass break-ups. He was not going to let the ball enter into Red Wolf territory. His persistency on the left side of the field shut down the ASU offense. There was no stopping him.

Brinson’s focus was so apparent in the post-game press conference on Monday, and it’s easy to see where it comes from.

Head Coach Chad Lunsford and staff are always focused and driven. Players have picked up on this, and now the focus is continuously set on the next goal.

“I don’t want us to come in thinking that it’s going to be an easy game,” Brinson said about the upcoming game against South Alabama.

Last year’s win against USA brought more success to Brinson. He acquired three pass break-ups and showed out on defense. He successfully completed three tackles to complement his interception, putting him at the top of the list for tackles during the game.

There is always another win to chase for Brinson. Yes, there is a time to enjoy the success and the victory, but the Eagles know that there is more ahead of them this season.

“It’s great to be an Eagle on a Saturday night after a win,” Brinson said. “[Sunday] was our last day celebrating. It’s behind us now, and we’re looking for our new opponent, South Alabama.”