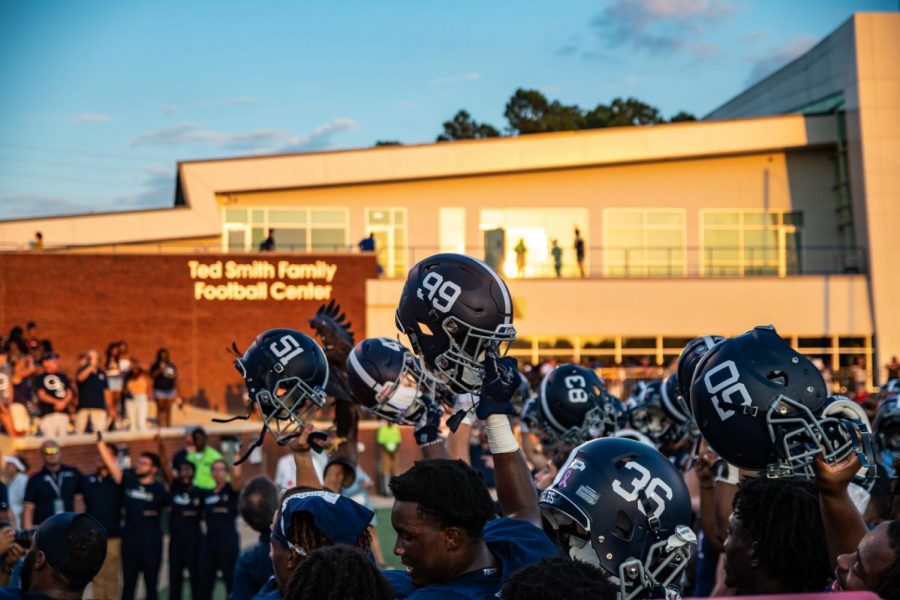 The Eagles held their helmets high for the Georgia Southern alma mater.

Fresh off of a win to get them bowl eligible, the Georgia Southern Football Team stands at a 6-1 record and is set to square off against perhaps their biggest rival, Appalachian State, on Thursday.

Not only is this game about the hatred and bragging rights between the two schools, the contest could have major implications on the race to claim the Sun Belt East Division Title. Before the schools face off on Thursday, here are four things to know about the match up.

The two schools have met 33 teams on the gridiron, with the Mountaineers leading the series 19-13-1.

Through Georgia Southern’s struggles in recent years, App State has taken the last three games in which the teams met by a combined score of 92-29.

The Mountaineers’ domination has been expected over the past few meetings, where the Eagles struggled to win games against any opponent. Even though they are heavily favored heading into this week, this is a much better Eagle team than in years past, and that combined with a hostile Statesboro crowd can spell trouble for the team from Boone.

The Eagles are the underdog

Regardless of playing on the road, the Mountaineers open up as an 8.5 point favorite over the Eagles.

App State comes into Statesboro riding a five game winning streak, and their only loss of the season coming in overtime against seventeenth ranked Penn State on the road.

Both teams have played some great football in 2018, but the Mountaineer defense has been lights out since their season opening loss, so the Eagles will have a very tough task ahead of them.

Over halfway through the 2018 campaign, both the Mountaineers and Eagles only have one loss, and both of them came to nationally ranked teams.

The Mountaineers fell at the hands of then tenth ranked Penn State in their season opener. A heavy underdog, App State forced overtime against the Nittany Lions, but eventually fell 45-38.

The Eagles’ lone loss came to number two Clemson on the road in September. The Eagles competed for a while in Death Valley, but were eventually defeated 38-7 by the Tigers.

Even though both teams lost their match ups with ranked opponents, both squads, especially the Mountaineers, showed they could compete among the best of the best.

The Mountaineers are the first ranked opponent to come to Paulson

The latest AP Poll released on Sunday had a surprising team sitting at number 25, the Appalachian State Mountaineers.

The success they have accumulated thus far in 2018 has them ranked for the first time in school history. The lone Sun Belt team in the top 25 also marks the first ranked team to take on the Eagles in Statesboro.

Since their move to the FBS in 2014, the Eagles have faced their fair share of ranked teams, but for the first time ever, they get to do it from Paulson Stadium on national television Thursday night.