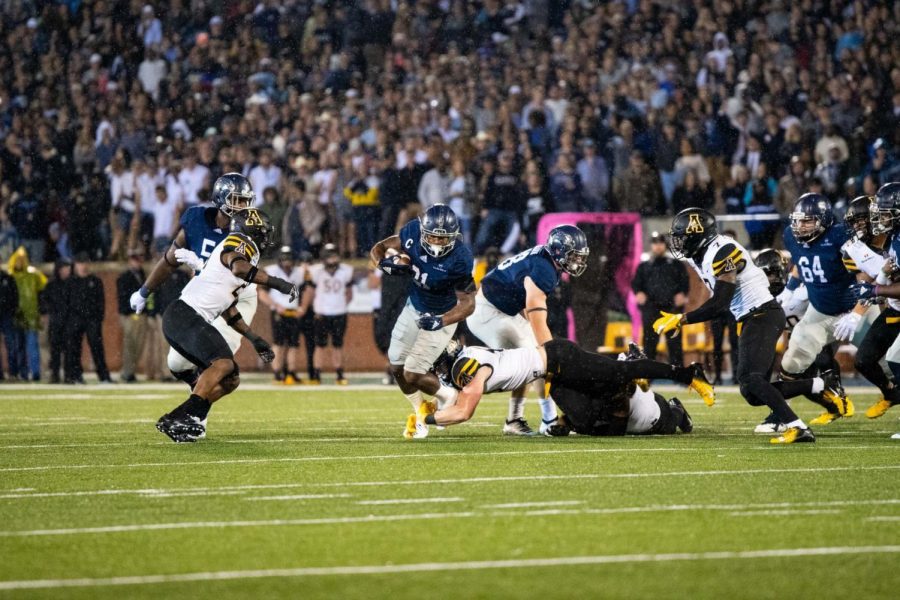 Senior running back Wesley Fields evades a tackle in the win over Appalachian State. Fields had 98 rushing yards and two touchdowns.

The Georgia Southern Eagles improved their record to 7-1 by earning their first win over a ranked opponent in the form of arch-rival Appalachian State. Here are five takeaways from the upset victory:

In addition to the passing touchdown, Werts exploded for a 47-yard touchdown on the ground, and rushed for 129 yards on the night. The quarterback engineered the Eagles’ first top-25 victory in program history, and talked about the importance after the game.

“Man, it feels great,” Werts said. “For the first time in program history, it feels good to be the team to get it done.”

The defense proves stellar yet again

App State lost their starting quarterback due to an undisclosed injury, and would not return to the game. The Eagles took advantage of the injury and held the Mountaineers to just 26 yards in the first quarter.

App State recorded only 115 total yards through the duration of the first half. In addition to limiting ASU’s yards, the GS defense forced three turnovers, recovering one fumble while pulling in two interceptions.

The redshirt-junior kicker has continued his success as GS’ kicker, by drilling two more field goals of 40+ yards. Bass hit a 42-yard kick in the first half and a 43-yard kick in the second half, and went perfect on PATs yet again.

The kicker has yet to miss a kick through the first eight games of the season. Bass is now 11-11 on field goals for the season, but more impressively is 6-6 on field goals coming from 40 yards or deeper.

The senior running back was essential in GS’ 34-14 drubbing of arch rival Appalachian State. A week after being held out against New Mexico State due to injury, Fields was a problem for the Mountaineer defense all night, rushing for 98 yards and two touchdowns.

The victory was the first over App State since 2014, when the Eagles topped the Mountaineers 34-14. After the game, Fields teared up talking about what it meant to finally beat App State.

“It means a lot, man,” Fields said. “Coming in my freshman year, just seeing how the older heads were working, knowing about the winning tradition, it’s been a winning program, and then the two years that I was here it’s just kinda been downhill. This year we trying to turn it around, trying to get the winning back, and come out here tonight and do this, man, it’s so amazing, it just shows you how good God is.”

This team is for real

If there were any questions about the legitimacy of this GS football team, Thursday’s beating of App State should prove otherwise. The Eagles improve to 7-1 a season after winning just two games, and control their own destiny to hosting the inaugural Sun Belt Championship.

The defense forced five touchdowns, lead the nation in turnover differential and have wreaked havoc on quarterbacks all season long. It’s not out of the realm of possibility that this team doesn’t lose another game, finishing 11-1 on the season.