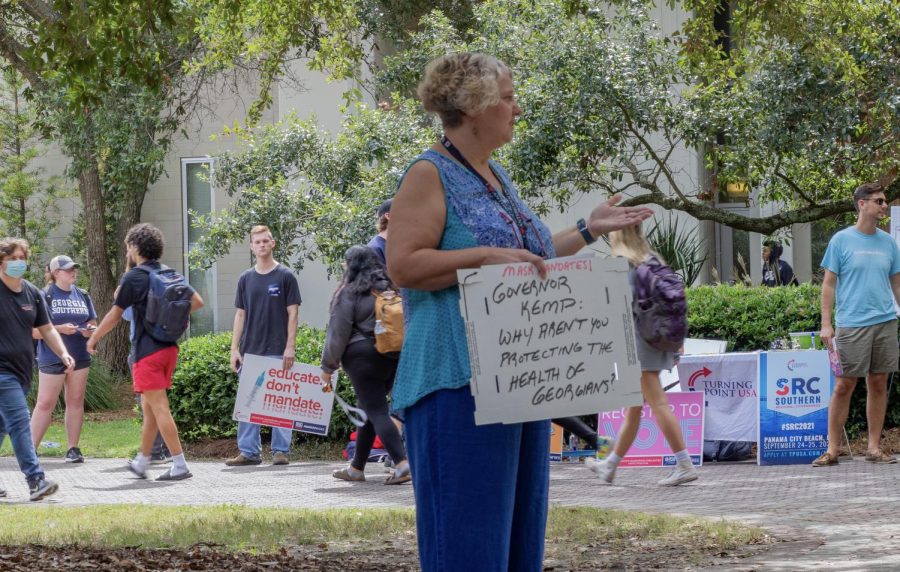 Both protesting professors and Turning Point USA gathered at campus Wednesday, one advocating for a campus-wide mask mandate, the other for choice.

“We didn’t even realize that they were going to be having a protest today,” Cassidy Riley an advocate for TP USA, a ‘non-partisan’ group that advocates for free speech, told the George-Anne. “So it was kind of a happy coincidence.”

Wednesday was the third day of state-wide protests by university professors wanting immediate mask mandates from the University System of Georgia (USG). While all speakers at Georgia Southern thus far have been professors, one student spoke out against Gov. Brian Kemp.

“The governor says we can’t have masks because that’s going to interfere with education, but professors, can you tell me how do you educate a corpse?” said history-graduate student speaker Kollin Thompson. “You can’t educate a corpse and a corpse can’t teach us anything.”

TP USA told the George-Anne they were on campus to register students to vote and to recruit for their club, displaying signs saying, “Educate don’t mandate,” and, “My body my choice, no mandatory vax,” which were all unintentional according to Riley.

“We just support freedom and your freedom to choose your rights, whether or not to wear a mask or get vaccinated,” Riley told the George-Anne.

With two days left of protests, the USG’s Board of Regents has yet to change their stance.

“We continue to be in alignment with the governor’s expectations and requirements for state agencies through this pandemic,” USG Chancellor Theresa McCartney said in a Board of Regents meeting Thursday.