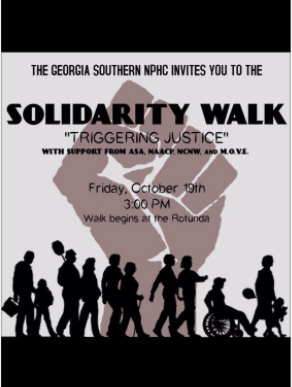 Student organizations are planning to hold a solidarity walk on Georgia Southern University’s Statesboro campus Friday in protest of a student’s usage of the N-word last summer.

The walk was organized by the National Pan-Hellenic Council. Other organizations participating include the NAACP, Know Your Worth, the Nation Council of Negro Women, African Student Association and MOVE.

“Her insta looks pretty normal not too n***erish,” the sender said in screenshots displayed on social media.

The message, according to posts on social media, used the actual N-word, and The George-Anne has chosen not to publish the slur in its original form.

The sender sent a follow-up message apologizing and said the message was meant for someone else, adding that the use of the N-word was a typo on her phone.

“I meant to say triggerish meaning like you seemed really cool nothing that triggered a red flag!” the sender said in screenshots displayed on social media. “I’m so embarrassed I apologize.”

The university has not made a statement confirming that the sender was Schaefer. Schaefer was also reached for comment multiple times via email but has not responded.

The walk will begin at the Russell Union at 3 p.m. and end at the RAC, where the GS swim team is scheduled to hold its first swim meet on the GS campus at 4 p.m.

Amanda Caldwell, head women’s swimming and diving coach, commented on plans for the protest of Schaefer.

“I can’t talk too much about that, but what I can tell you is that there’s going to be distractions always,” Caldwell said. “I welcome people to use their First Amendment right, and honestly, maybe they show up and enjoy a swim meet.”

NPHC President Peter Egede said the following statement about the walk via email:

{{tncms-inline content=”&lt;p&gt;&quot;This solidarity walk is to show the campus and community that we as students stand together in the face of adversity, racism, and divisiveness. The NPHC prides itself in using its efforts to ensure the political, educational, social, and economic equality of rights for all persons, and to eliminate race-based discrimination in all areas and functionalities. As an august body of different organizations and groups, we feel constantly berated, neglected, and targeted by a university that continues to turn a blind eye to racist actions, and a university that subsequently fosters a prejudice environment. The Black or African American demographic of students at Georgia Southern who make up over 25 percent of the campus population are seeking active justice and measurable changes to a system that seemingly does not share our same viewpoints and perspectives on discriminatory issues. For these reasons, we’re doing the walk at the first swim meet for Georgia Southern, which of course is the sport that the girl plays and represents our school.&quot;&lt;/p&gt; ” id=”d3ecd2e1-8b3e-4c8d-88d4-146a7c293925″ style-type=”quote” title=”Pull” type=”relcontent”}}

Ashton Johnson, president of the GS NAACP, said the march is not about creating hatred or division on campus.

{{tncms-inline content=”&lt;p&gt;&quot;Really, what we&amp;rsquo;re trying to accomplish, at least with the NAACP, is we would like to see the removal of Courtney Schaefer from the swim team and it&amp;rsquo;s not coming from a point of hatred, but if you&amp;rsquo;re going to represent the school and its ideals as an athlete, wearing Georgia Southern athletic wear and on your swimsuit, you can not say certain things,&quot; Johnson said. &quot;If the NFL player, Colin Kaepernick is being removed from the National Football League for kneeling for the national anthem, and someone can say racial slurs towards someone, whether it was intentional, and still proudly walk around this school and be protected by the athletic association of this university, that&amp;rsquo;s a problem and we can not stand for that.&quot;&lt;/p&gt; ” id=”4ec60c42-c361-4c1b-8a11-112f161ad999″ style-type=”quote” title=”Pull 2″ type=”relcontent”}}

McClain Baxley and Ashley Jones contributed to this article.