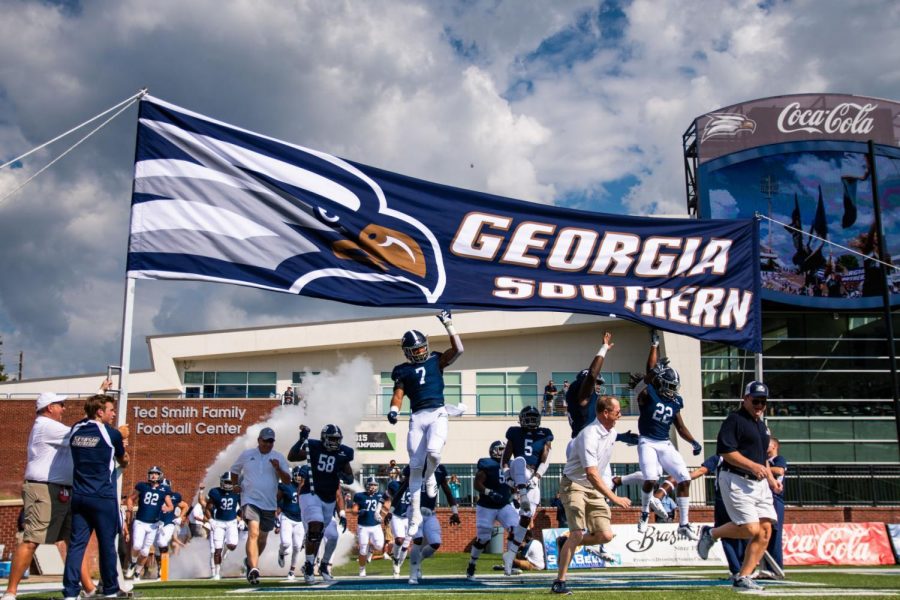 At 5-1, the Georgia Southern Eagles have the opportunity to clinch a bowl game this Saturday in Las Cruces, New Mexico.

Georgia Southern is set to travel to Las Cruces, New Mexico, where they will square off against the Aggies in a game that could clinch bowl eligibility for the Eagles.

Here are four things we know about Saturday’s road contest:

This game is the fifth meeting in five years between the two teams, with New Mexico State winning most recently in 2017.

With the exception of 2015, where the Eagles drubbed the Aggies by 30 points (56-26), each game has been won by one possession. This matchup will be the first time the two teams face each other in a non-conference affair due to New Mexico State’s departure from the Sun Belt Conference at the end of last season.

GS opens up as a 13-point road favorite

The Eagles, looking to become bowl-eligible for the first time since 2015, could see it happen on Saturday.

New Mexico State (3-4) is coming off a record-breaking loss to Louisiana-Lafayette, who put up 66 points on the Aggies. With the exception of last week’s game against Texas State, the GS offense has played much better than the year before, and with a little passing in the fold, redshirt-sophomore quarterback Shai Werts could be set up to have a career day.

Both teams have a loss to a Power-5 opponent

GS and New Mexico State both have losses to P5 teams, with the Eagles losing to the then No. 2 Clemson Tigers, and the Aggies falling to the Golden Gophers of Minnesota.

The games were played very differently, however. GS lost to Clemson 38-7 but forced four turnovers on defense, winning the turnover battle. The Aggies played an unranked Minnesota team and lost 48-10.

That’s right. Georgia Southern hasn’t won a road conference game since 2013, when they took down the Florida Gators and made history.

The win would break a streak that’s lasted nearly six years, in which the Eagles have been handed heartbreaking losses to teams like UGA, Georgia Tech and North Carolina State.

Kickoff on Saturday is scheduled for 6 p.m. Eastern.