Education Has No Age

A Journey From Veteran To College Student 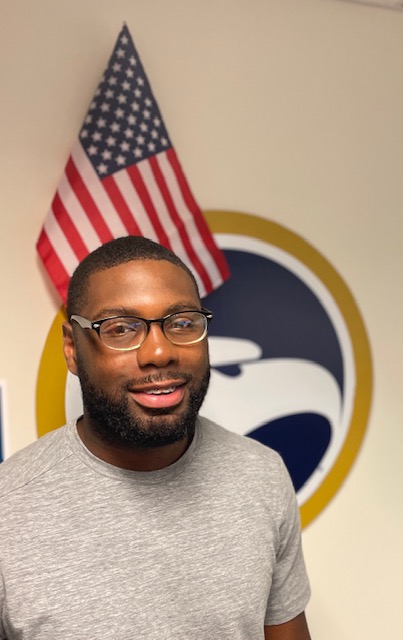 Serving for our country in the military is a high honor, filled with sacrifice, discipline, and triumph. After leaving, what comes next for so many veterans? What stays with them?

For Franklin Cooper, a junior here at Georgia Southern, the next step was getting a higher education as a first-generation college student, and redirecting his learned discipline from the military, to his degree.

After graduating high school in Chicago, his hometown, Franklin Cooper served in the U.S. Army for six years as a Logistical Specialist. He was deployed twice, once in Jordan and once in Bahrain.

Cooper initially joined the military to get out of his hometown, travel to see the world, and thought that wearing the uniform would be pretty cool. He quickly discovered that the Army was so much more than this, and that he was a part of something bigger than himself.

“I learned how to work and become family with other soldiers from all over the world. Being in the military instilled discipline, pride and direction into my life that I will forever be grateful for,” he stated.

After his time in the military came to a close, Cooper had the opportunity to work with a service program called FEMA Corps. Through this, he was able to serve people and communities in California that were impacted by different disasters.

He really enjoyed his work with FEMA, and thought this was something he could see himself doing as a career. To be able to progress with them, Cooper knew he needed to go back to school.

A more personal reason that pushed Cooper to get a college degree, was for the accomplishment, especially since he will be the first of his immediate family with a higher education.

“I feel like I’ve done a lot of stuff in my life to be young,” he exclaimed. “I felt like getting my education was kind of like my next big thing.”

Cooper started his college journey at East Georgia State College and is now at Georgia Southern University studying Public Health. He is also planning on going to graduate school with the intention of later working for FEMA or other emergency management companies.

What being a non-traditional student means to Cooper, is having the life experience and discipline to know how to navigate his degree and future.

“I don’t think I would think the same, being eighteen starting college,” he exclaimed. “Now that I’ve kind of lived life a little bit, I know what I want.”

When reflecting on his decision to go to school later in life, Cooper said, “You just wake up and do it everyday. You know you want to accomplish this goal, so I just kind of do it. I guess that’s like the military in me, so I am kind of disciplined to do it.”

When Cooper is not in class, he can be found in the Office of Military and Veteran Services, doing his work-study program under Cameron Jones. There he helps certify anyone who has served, or is serving, their benefits to go to school at Georgia Southern.

He is also the President of the Student Veterans Association, with goals to rebuild it and create a community for them at Georgia Southern. “We’re all non-traditional students,” said Cooper. “We lived a different life prior to coming to college, so it’s good to have fellow veterans around to feel included.”

Cooper wants other veterans at Georgia Southern to know that they are not alone, and resources are out there if they have any questions or needs. Their office is only a phone call away if veterans want to talk through mental issues, or need help with anything.

“We’ve all been in those situations that are tough,” he said. “We can understand and if we can’t relate to your situation, someone else can. So just don’t hesitate to ask questions, or reach out for help.”

Swing by the Office of Military and Veteran Services next time you are in Russell Union to say hello to Cooper, and always remember to thank our veterans here at Georgia Southern.