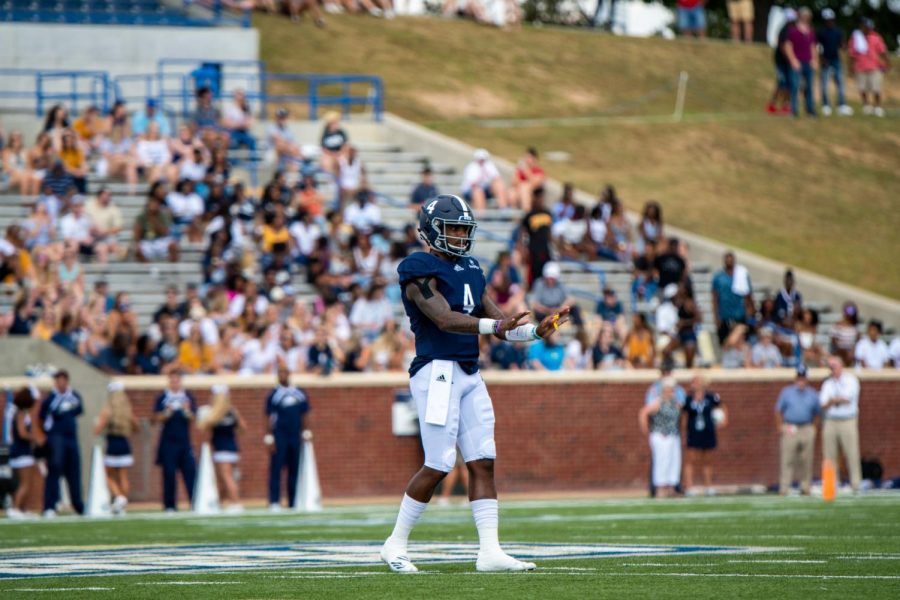 Redshirt-sophomore quarterback Shai Werts had 147 total yards and a rushing touchdown in the win over New Mexico State.

Georgia Southern rolls over New Mexico State 48-31 en route to their sixth win of the season, giving the Eagles a postseason for the first time since 2015.

GS trailed NMSU early after surrendering touchdowns on each of the first two Aggies drives, making it a 3-14 game, the biggest deficit the Eagles have faced all season minus the Clemson game.

It was a late touchdown in the first quarter by sophomore slot back Wesley Kennedy III that changed the momentum. GS would trail at the end of the first quarter, 10-14. The Eagles’ offense was off and rolling after their first touchdown, scoring a TD on each of their next six possessions, allowing them to pull away from the Aggies.

Wesley Fields, the senior running back, did not play due to injury, but it was the redshirt-freshman Logan Wright, who picked up the slack. Wright ran 136 yards off of 17 attempts while finding the end zone twice in the game. Those touchdowns were the first two touchdowns of the freshman’s collegiate career.

Quarterback Shai Werts went 4-4 through the air, hitting for different receivers in the process, and the redshirt-sophomore was just as effective on the ground, running six times for 70 yards and a score.

Defensively, after allowing those first two touchdowns, GS buckled down and was able to limit any damage that NMSU was trying to cause.

Sophomore defensive lineman, Quan Griffin recovered a fumble in the third quarter, leading to yet another Eagle touchdown. The fumble recovered by Griffin marked the 10th straight game the GS defense has recorded a turnover, but they weren’t done there.

Junior cornerback Kindle Vildor came up big with a fourth quarter interception that would lead to a GS score, giving the Eagles a 28 point lead.

Special teams played solid again, with redshirt-junior kicker Tyler Bass continuing to be ole’ reliable. Bass went 2-2 on field goal attempts with another kick of 40+ yards, this time for 41 yards, and punched through all six of his extra point attempts.

GS hosts Appalachian State on Thursday night with big implications for December’s inaugural Sun Belt Championship, with the winner most likely representing the East division. Kick-off is scheduled for 7:30 and will air on ESPNU.