Eagles 1-3 for the season after heartbreaker with Louisiana 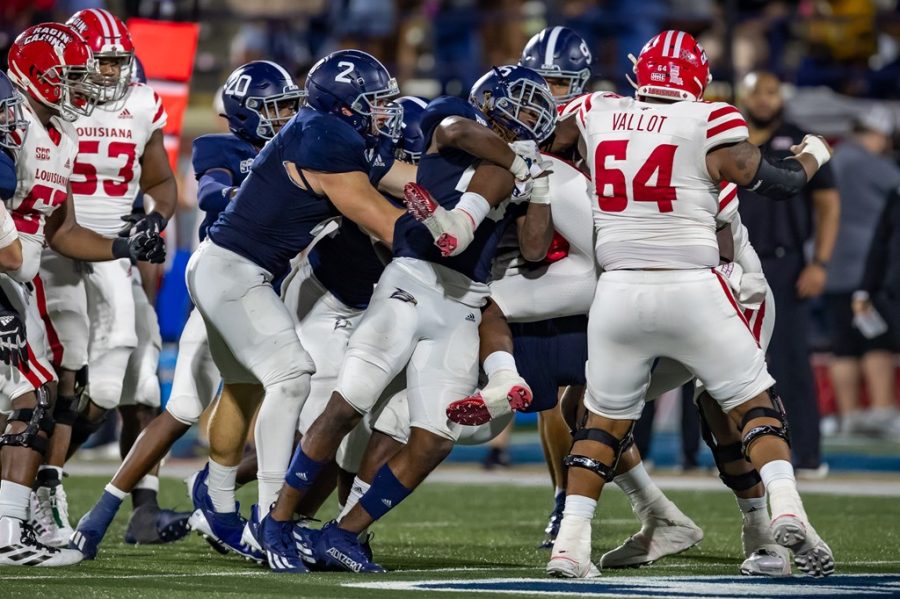 The Eagles held the lead after the first quarter; however, the lead would not last long, as Lousiana was up by one entering halftime.

For the fourth straight game, GS failed to score a third quarter point, while also turning the ball over on downs twice and throwing an interception. The Eagle miscues paved the way for the Ragin’ Cajuns to open up a 14-point lead.

Although the Eagles condensed the UL lead down to just one possession in the fourth quarter, offensive struggles kept the team from a legitimate chance at tying the game.

“I’m really heartbroken for the guys,” said head coach Chad Lunsford “I thought that the way they prepared this week, all week I thought they emptied the tank.”

Gerald Green was the star of the night for the Eagles, racking up 186 yards and three touchdowns on just 18 carries. His night was made even more impressive by the fact that he alone outrushed the entire UL offense.

“I think Gerald is a very explosive player, he’s really good at hitting the hole, exploding through tackles,” said Lunsford. “He’s got really good vision and then when he does get out there, he can roll.”

Despite the loss, the Eagles were optimistic about the remainder of the season. Lunsford expressed his belief that GS improved in some areas of the game.

“I thought we got better in areas,” said Lunsford. “We started playing pretty well defensively.We did give up a big one early on in the first half, but I thought our guys really rallied at home.”

GS will play a second consecutive home game on Saturday, when they host the Arkansas State Red Wolves. The Red Wolves also sit at 1-3 to begin the 2021 season, but have yet to begin conference play. Kickoff is scheduled for 4 p.m. and will be televised on ESPN+.