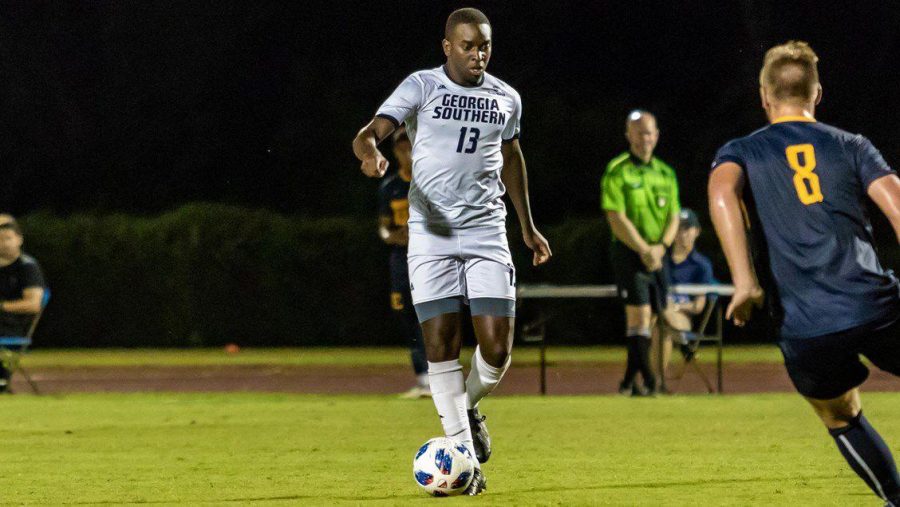 Captain Justin Little controls and distributes the ball from the defensive line.

Both Georgia Southern soccer teams will be active this weekend, as the men have one the road and the women play two games at home.

After an impressive win over FAU Tuesday, the Eagles will be hitting the road to compete in their first conference game of the season against Howard.

The Bison currently hold a record of 1-4-3, with a single win over Bryant University.

While GS seemed to have been in a bit of a slump, their performance and win over FAU shows the Eagles are back in the game.

The Eagles showed good passing game and ball control against FAU and hopefully they can bring that game to Washington.

Javier Carbonell is serving as a huge asset to the Eagles while also making Sun Belt history as he logged two goals against FAU, making that 12 total goals for Carbonell this season.

The Eagles all together have had 134 shots, averaging 14.9 shots per game.

The match will begin at 5 p.m. Saturday in Washington, D.C.

Women’s soccer is looking to rebound from their loss against South Alabama as they host both Texas State and Troy.

Troy will be entering Statesboro Friday to face the Eagles at Eagle Field. The Trojans currently hold a record of 2-10-1 and are on a loss streak of four.

The Eagles will then take on TSU Sunday. The Bobcats hold a 6-5-1 record and are coming off a win over Arkansas State.

So far this season the Eagles have logged 122 shots, averaging 11.1 shots per game while Troy has logged 116 shots and TSU has tallied 146 shots.