Springer finding success in goal with her third team 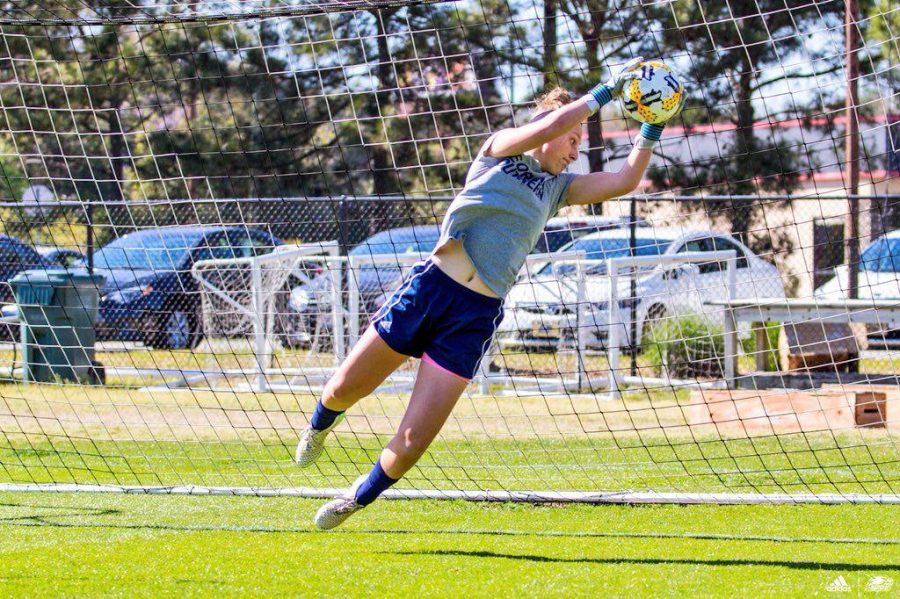 Springer makes a save in practice. Georgia Southern is Springer's third college program she has played for.

The Georgia Southern women’s soccer team is just getting into the heap of their 2018 conference schedule, and with the multitude of crucial games on the horizon for the Eagles, one of their experienced leaders is stepping up in a big way.

Goalkeeper Jocelyn Springer earned the Sun Belt Conference Defensive Player of the Week honor after she recorded seven saves and posted her second shutout of the season against conference rival Georgia State on Sept. 14.

While she alone won the award, Springer was quick to point out that she couldn’t take all of the credit.

“It just makes a big statement about how hard our defense is working,” Springer said. “I might have received the award, but it attributes to the whole defense, not just myself.”

The selfless goalkeeper, originally from Lincoln, Nebraska, is a redshirt senior, and GS marks the third different school at which Springer has played collegiate soccer. She began her career at Brevard College, where she started every game for two seasons from 2014-15.

Springer transferred to the University of Kentucky in 2016 for her junior season, but she took a redshirt year and saw no action for the Wildcats.

Springer then came to Georgia Southern in 2017 as a redshirt junior, but she had to sit out for a second straight season due to NCAA transfer rules. Now in her redshirt senior season, Springer is the starting goalkeeper for the Eagles.

Even with the changes in schools, Springer says the training and preparation she’s undergoing is mostly the same, and that things don’t generally change much at her position, no matter the school.

But her position, one of the most under-discussed in all of sports, is of the utmost importance, and Springer takes that into consideration when preparing for a game.

“When gameday rolls around, I spend about an hour just mentally preparing,” Springer said.

The game, Springer says, especially at her position, can be a large mental challenge, and one slip-up could be extremely costly.

“If you make one mistake, it could cost your team the game,” Springer said.

And with the most important part of their schedule finally arriving, the Eagles need Springer’s excellent play to help lead them to victory.

Her shutout against Georgia State, the team’s first conference matchup, paved the way for the Eagles to take the win.

“All of our hard work is finally paying off,” Springer said. “We are finally seeing the benefits of everything we’ve done.”