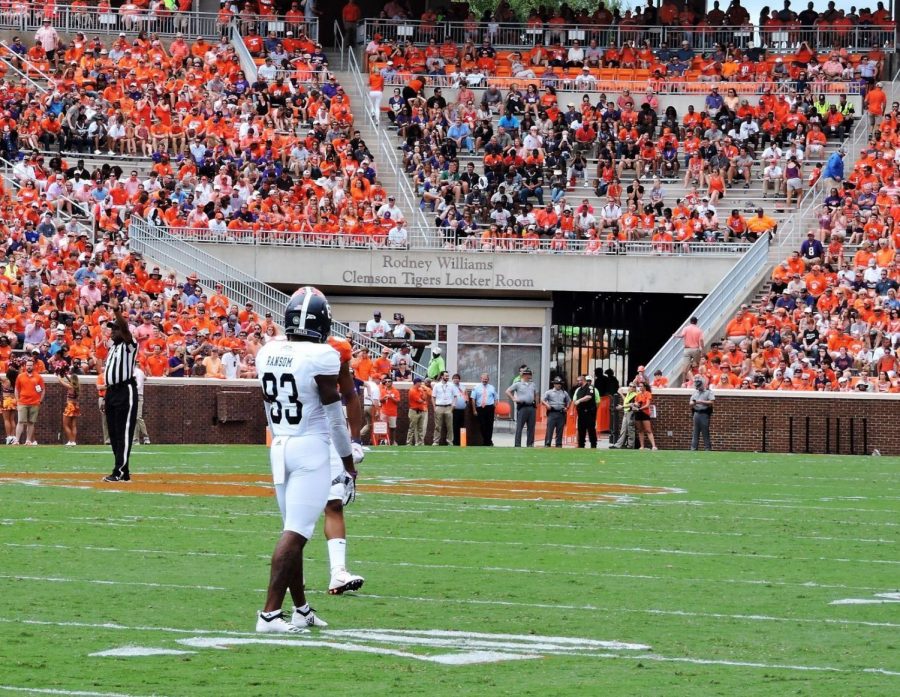 Colby Ransom lines up in the loss against Clemson. Ransom was named 2014 Student Athlete of the year at South Gwinnett High School.

Amidst the re-emergence of the spread option has been the emergence of several new roleplayers in the receiving core. One of those new receivers is redshirt-junior Colby Ransom.

In just one season at South Gwinnett High School, Ransom had a touchdown catch and was named the 2014 Student-Athlete of the Year. But in his first year at Georgia Southern, he was redshirted.

Though he saw the field in 2016 and saw even more playing time in 2017, Ransom has become a pivotal factor in the Eagles’ gameplan beginning in fall practice with the redshirt-junior getting more and more reps with Shai Werts and the rest of the first team offense.

“It’s been a grind since I’ve been here,” Ransom said. “It’s been a long and hard process.”

With the first team, Ransom became comfortable and his ability shined. The fall camp battle between him and redshirt-sophomore safety Amari Thompson was a tout between to guys that were fighting for starting roles.

Ransom won his battle and has since started all three games of his fourth year with the Eagles.

“It’s been a great experience,” Ransom said. “It’s been fun playing for this coaching staff.”

In the spread option offense, the redshirt-junior has three catches for 21 yards, with one of the catches going for 17 yards.

That 17-yard catch against UMass was Ransom’s first collegiate touchdown.

“[Scoring the touchdown] was an amazing feeling,” Ransom said. “I had been waiting on that feeling since I was young, so it was great. No words can really describe how I felt.”

The catch from Ransom made it a 14 point game and gave the Eagles all the momentum they needed to preserve the win over the Minutemen.

Head coach Chad Lunsford made sure that Ransom’s work was appreciated.

“That [play] was really big for us and really big for the football team,” Lunsford said. “We always talk about next man up around here and that was the opportunity.”

“I love the coaching staff,” Ransom said. “It’s fun and it’s new and I just love it.”