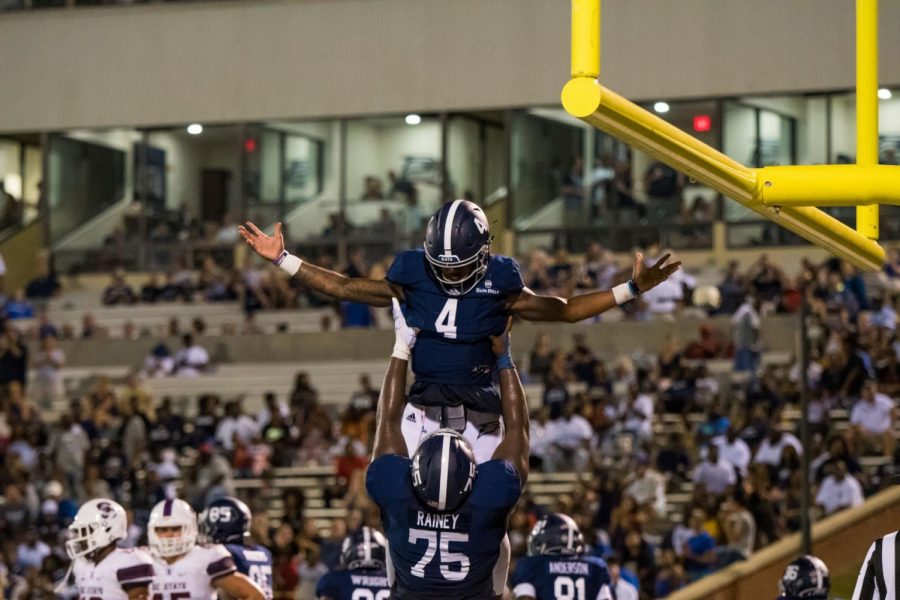 Pictured: Shai Werts engages in celebration with teammate Curtis Rainey after the Eagles scored a touchdown against South Carolina State.

After their demanding, 37-6, week-one win against South Carolina State, the Georgia Southern football team is facing a more difficult matchup with UMass in week two.

The two teams squared off in Amherst, Massachusetts last season, where the Minutemen dominated the game and left with a 55-20 victory. With this year’s contest being held in Paulson Stadium, the Eagles are hoping for a different outcome, and to get some revenge on the team from up North.

Just two games into their 2018 season, the Minutemen are averaging a whopping 42 points per game. With offensive firepower like that, the Eagles’ defense is going to have their hands full. In their first and only contest, the Eagles allowed just one touchdown, and it came on the ground, where South Carolina State relied on their offense the most.

However, UMass’ offense is much more balanced, with 539 yards through the air and 349 on the ground in their first two games combined. The Eagles will rely on their older, more experienced defense to keep the Minutemen at bay, leading themselves to a victory during Saturday’s game.

The Eagles put up 37 points in their home opener, but with the offense UMass is bringing into Statesboro, GS is going to have to keep their offense rolling in the second contest.

Although they only allowed 15 points in the first game, the Minutemen defense struggled to contain Boston College in week two, where they allowed 55 points throughout the game. BC put up 272 rushing yards against UMass, which should bring a boost of confidence to the Eagles, who, as we know, get most of their yardage on the ground.

Expect the Eagles to play the traditional “Georgia Southern Way” of football and drive the ball downfield using their dynamic playmakers ability to run the football.

This might not be the number one thought on the minds of the Eagles, but it’s possible that last year’s loss is still lingering within this experienced GS roster. They come into this weekend as a slight 2.5 point favorite, but the Eagles are going to need to leave it all on the field to leave Paulson with a win Saturday.

GS will simply need to come out, offensively play their way and contain the UMass offense, and the Eagles should be able to get sweet revenge on the Minutemen Saturday night.

Kickoff from Paulson Stadium is set for 6 p.m. on Saturday, Sept. 8.