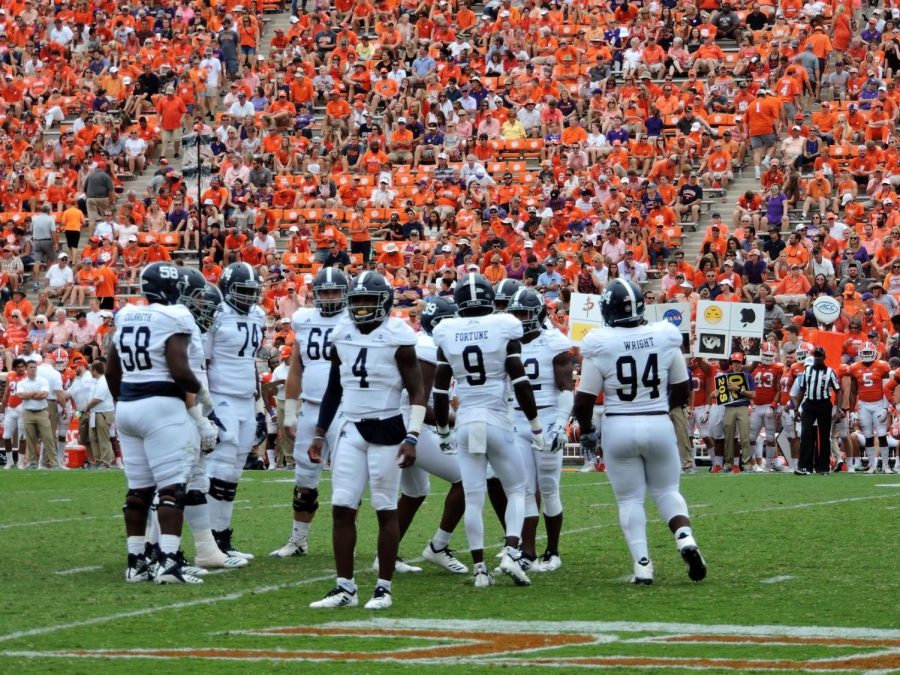 Redshirt-sophomore quarterback Shai Werts (4) reads the play call in the second quarter of the game against No. 2 Clemson. The offense finished with just 140 offensive yards on the afternoon.

The 2018 football season is a quarter of the way through and the Georgia Southern Eagles are 2-1 with games against three quite different opponents. Here are 10 stats and numbers that jump out after three games:

A year ago, the offense was stale and stagnant. This year behind a less-experienced offensive line, Werts and Fields have been able to run with ease and create big plays through the holes. Werts has picked up 256 yards and five touchdowns, while Fields is at 200 rushing yards and one score.

The team is averaging just three penalties per game

GS has been incredibly disciplined on both sides of the ball and has only had nine penalties for 65 yards through three games. A big compliment to their discipline was the second half against Clemson where the game was essentially over. The Eagles easily could’ve lost their cool, but they didn’t.

The redshirt-junior has hit all nine extra points and is three for three on field goals, including a 50-yard field goal against UMass. Bass is making a strong case for the Lou Groza Award heading into conference play.

The offense has already scored 10 touchdowns

Once again, the offense has been completely rejuvenated and has been firing on most cylinders. Last season, the Eagles relied too much on the defense to score and to keep the game close. This year, the offense is grooving and already has two 30 point games.

Only one passing touchdown allowed

Too many times last year, the secondary would be beat over the top for huge gains (cc: the New Mexico State and Arkansas State games). While only two of the teams they’ve played are proficient at passing, the lone score from Trevor Lawrence in Clemson is a testament to the work of the secondary.

Scored on 91% of red zone trips

When the Eagles are getting to the red zone, they’re making the most of it. Out of the 11 trips GS has made, they’ve come away with nine touchdowns. Efficiency and discipline when it matters most has been impressive to see.

If you take out the Clemson game, GS hasn’t allowed a sack

Now, the Clemson game was played where one of the best defensive lines got to Werts four times for a loss of 15 yards. But again this shows how much potential this young offensive line has. Fortunately for the Eagles, they aren’t facing Clemson every week.

This is just awesome to see. The video of Wright quite literally running over Clemson players has gone viral on twitter via Barstool Sports and it’s crazy to see a number 94 running. It was something that had to be done by Bob DeBesse to attack the Clemson line, but it could make a return in the future.

Like Wright’s rushing stats, this is something that is just fun. But Fortune’s trick pass to Wes Kennedy III set up the Eagles’ touchdown against Clemson. Had it not worked, GS probably would’ve been shutout on the afternoon.

The junior cornerback has been a beast through three games and is earning his preseason All-Sun Belt selection. He had to step it up against Clemson with Josh Moon being out and he did well. Brinson wil be a force to be reckoned with in conference play.

Bonus: Matt Breida has the most rushing yards in the NFL currently

He’s electric and captures all of South Georgia’s excitement even though hes playing 2,681 miles from Statesboro. In his third year in the league, Breida has become the feature back for San Francisco, putting up 184 rushing yards. The former Eagle scored his first touchdown of the season in the 49ers’ win over the Lions.