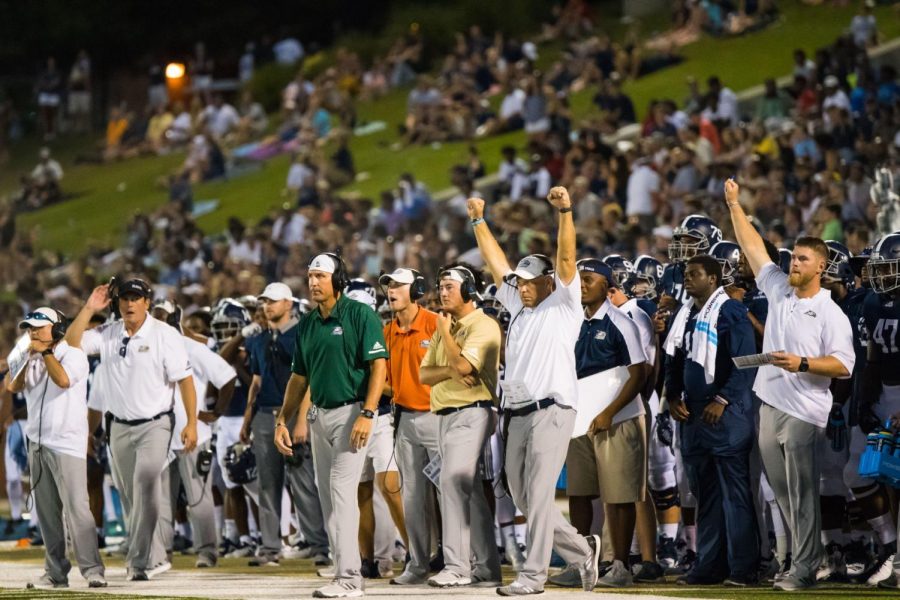 Head Coach Chad Lunsford celebrates after a 31-6 victory over South Carolina State. The Eagles head to Clemson this week for the first time in school history

In the most marquee game for the Eagles this season, Georgia Southern will travel to Clemson, South Carolina for a matchup against the number two team in America.

Here are four things we know about GS’ game in the Palmetto State:

It wasn’t that long ago that the Eagles began the season 2-0. In 2016, GS started the season 3-0 before cooling down to finish the season 5-7. The Eagles’ had two difficult non-conference road contests against Georgia Tech in Atlanta and an undefeated Western Michigan team in Kalamazoo.

GS is a 35 point underdog

It was expected that the Eagles would be underdogs this week, the question was how big of an underdog. GS was a 35 point underdog in the season opener last year against Auburn and was able to cover—by one point. The Eagles didn’t do too great against the spread last year with a 3-9 record ATS.

This year though, GS is 2-0 ATS, blowing away the spread against UMass. The Eagles were 1.5 point favorites against the Minutemen and ended up winning by 21. The Tigers are 1-1 ATS this year after only beating Texas A&M by two as an 11 point favorite.

These two teams have never played in football

Saturday will be the Eagles second game against a ranked FBS opponent since their transition to FBS (Auburn 2017), but it will be the eighth time the Eagles have played a top 10 team in school history. GS is 0-7 against teams ranked in the top 10. Clemson is 10-0 against current Sun Belt teams

GS has a better all-time win percentage than Clemson

Clemson has more FBS national championships, more NFL Draft picks and more consensus All-Americans than GS. But the Eagles have a 63.5 winning percentage compared to the Tigers’ 61. Sure, the majority of GS’ wins came from their time in Division 1-AA, but 381 wins is 381 wins.