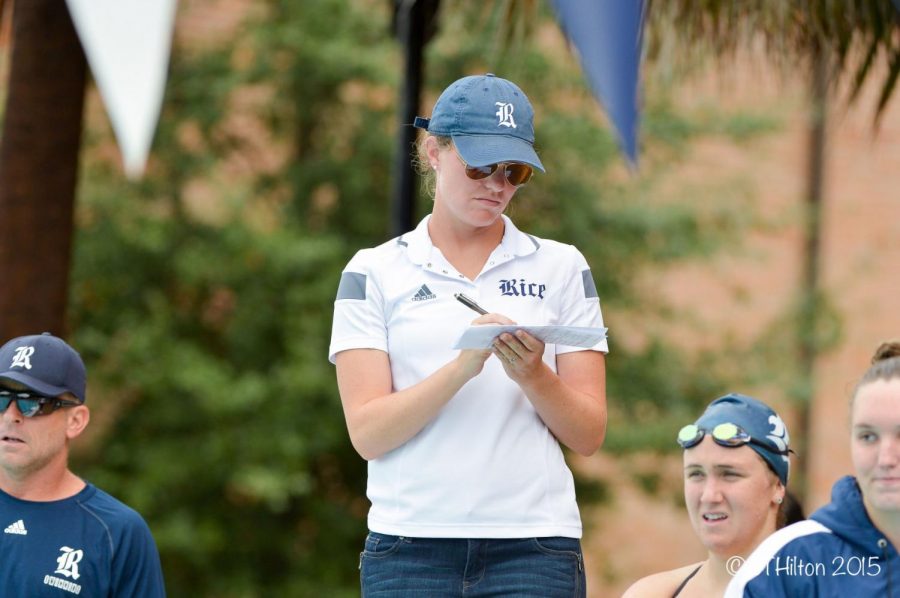 First year head coach Amanda Caldwell comes to Georgia Southern after being assistant coach at Rice University the past six seasons. The Owls won three Conference-USA titles in that span.

When head swimming and diving coach Amanda Caldwell took the job at Georgia Southern in May, there was a new sense of buzz around the pool. Caldwell came to the Eagles from Rice University where she helped the Owls win three Conference-USA titles.

“I was very intentional when I was looking for jobs, I knew I wanted to be a head coach,” Caldwell said. “I wanted an opportunity to step in somewhere and grow it.”

After finishing no higher than third in the Coastal Collegiate Sports Association(CCSA) in the past six seasons, there was noticeable room for improvement with the GS team. Fortunately for Caldwell, there was a base of talent and experience facing her in the locker room.

With 16 juniors and seniors on the 2018-2019 roster, the talent was there, but the new head coach wanted to first boost her team’s character and mentality before heading to the water.

“We had a lot of meetings,” Caldwell said. “We had a team retreat that we started off after the first week of school. A lot of that was learning how to communicate—communicate with each other, communicate one’s needs, how to talk about your fears, set your own goals and boundaries.”

Caldwell lamented in the low goal setting of the team. Coming from a team that had rotating swimmers on the podiums, Caldwell knew she had to plant a belief in the Eagles of how great they could be.

And it started with the athletes buying into what the new coaching staff was trying to do.

“The majority of my team has a lot of questions, especially the seniors and juniors. They want to know why we’re doing what we’re doing,” Caldwell said. “And that’s the most important question every human being has is, ‘what’s in it for me?’ So them being able to ask those questions and being able to figure out what’s going on, they get more buy in.”

With such a veteran team, Caldwell has already seen growth in many of the swimmers, both in and out of the pool. Once Caldwell had the values and mindset right with her team, the focus was shifted to in-pool action, where again the older swimmers are expected to play important roles.

“Our senior class is very talented and there’s a lot of scorers in there coming back,” Caldwell said. “I’ve been really pleased with Anna Kassis and Anna Moore with their training over the summer. They stuck around and I got to meet six of them over the summer. I’m really excited in what I’ve seen in training from Bre Stuart and Courtney Schaefer. They’re ready to go hard already and we have time.”

The schedule lends itself to success with their first meet this weekend against a talented SCAD team. Caldwell made sure though to keep a familiar competition on the schedule by adding Conference-USA’s Tulane.

“They have a new coach as well, she came from the University of Florida,” Caldwell said. “They are someone who is towards the top of their conference.”

The Eagles start their season in Savannah against SCAD, but their first home meet isn’t too far down the road with UNC-Asheville coming to the GS Aquatic Center Oct. 19 for a CCSA competition. GS travels to Campbell the following week for another stout CCSA school.

“UNC-Asheville and Campbell are two teams that have good coaches with some studs on their team and that’s going to really get our girls to level up,” Caldwell said.

This GS team has experience in the water and on the boards and now has a self-belief in themselves. It’s going to be a long season with the CCSA Championships not until mid-February, but Caldwell is pleased in the maturity shown from her team so far.

“We have a lot of personalities on the team which keeps it interesting, keeps it fun,” Caldwell said. “We have the talent there, we just have to believe it.”