Over a year after the original concert date, Harry Styles took the stage in Atlanta, Georgia 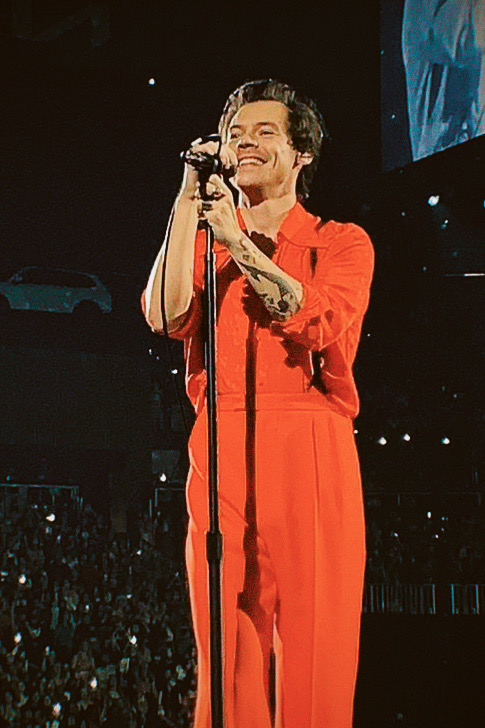 If you were near State Farm Arena in Atlanta on October 27 and 28, it probably felt as though you went back in time. Thousands of young fans looked as if they came straight from the Seventies — many of them sporting outfits they’ve waited over a year to wear. From pantsuits and suspenders to fluffy, feather boas, everyone in attendance looked their best for Harry Styles’s long-awaited return to Atlanta.

Styles released his sophomore album, Fine Line, in late 2019 and announced a world tour for the following year. However, much like everything else in 2020, the “Watermelon Sugar” singer’s lengthy stretch of shows didn’t go as planned due to the Coronavirus pandemic.

Even though fans waited much longer than originally planned to see Styles (thanks, COVID), it was, without a doubt, worth the wait. Not even the rain in Atlanta could’ve brought the mood down. The show was everything I hoped for and more.

While waiting for Styles and his band to come out, the arena was filled with music. Fans cheerily sang along to Queen’s “Bohemian Rhapsody,” Britney Spears’s “Toxic,” and One Direction’s (Styles’s former boy-band) “Olivia.” As I looked around the general admission pit that was full of “Harry stans,” there were smiling faces as far as the eye could see.

Styles took the stage around 9:15 p.m., looking dapper as ever. In true Harry fashion, he was dressed head to toe in a red colorblock shirt and pant ensemble, complete with skinny black suspenders. His outfit did not disappoint, and neither did his performance.

The next 90 minutes were full of life. It truly was a party. He kicked off the concert with “Golden,” and it just got better from there. I immediately understood how he was able to sell out two arena shows with such ease. Styles performed nearly every song from his latest album, along with several hits from his first record, Harry Styles.

From what I’ve heard, the first time Styles came to Atlanta, his performance created a very soft-pop, folky atmosphere. Reports claim it was very acoustic heavy. This was not the case the next time around. It was the best of modern pop and Seventies rock combined. The crowd came more alive with every note.

About halfway through the show, Styles spoke of the now year and a half long pandemic, and the state of the world this time last year.

For many in attendance (myself included), this was the first live show since the great concert cancellation of 2020. For me, it felt like going to a concert for the very first time. I lost my concert virginity all over again. Harry Styles puts on the type of show that reminds you of why you fell in love with music in the first place.

Towards the end of his main setlist, the revelating atmosphere got even stronger when Styles performed “Treat People With Kindness,” his personal motto. Styles danced around the stage with a pride flag in hand. The end of his main set can only be described as pure joy.

As for his encore, he played his first hit single, “Sign of the Times.” I have absolutely adored this song since it’s release, but hearing it live and in person under a glimmering disco ball was breathtaking. A great piano ballad is meant to be incredibly moving. It should almost feel spiritual. “Sign of the Times” did just that.

After performing his first hit, Styles then performed his biggest hit to date, “Watermelon Sugar.” With the help of his bandmates, the reworked live rendition of the chart topping song was funky and eclectic. Hearing the song in all its glory felt like being at a party on the beach on a cool summer night.

Last, but not least, Styles brought the house down with the most rock-heavy track in his discography, “Kiwi.” The energy from the band was absolutely incredible, but the energy of the fans was even crazier, which came as no surprise as this one is definitely a fan favorite. This was the perfect song to end the night with.

This was an incredibly special evening. So special, that for 90 minutes, the hecticness of the world seemed like a distant memory.