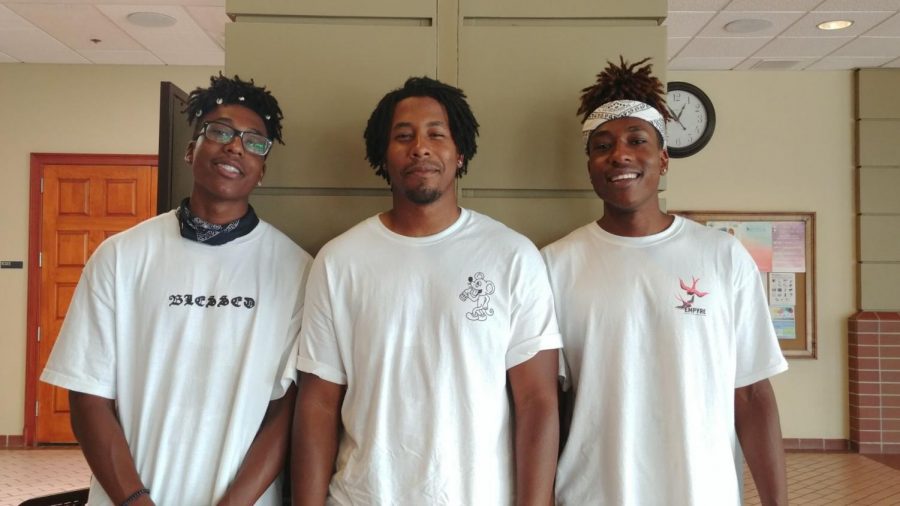 Christian Alex Young (left), NatoJazz (middle), and Cam Young (right) are a student rap group called ItsFridayNite. Cam and Christian are undeclared freshmen at Georgia Southern University on the Armstrong campus and Nate is a graduate with two associates degrees in computer support.

Rap trio ItsFridayNite performed at the Rotunda during the Farmers Market Festival Tuesday afternoon, but the group hopes to one day conquer larger stages.

“Everybody has this kind of blueprint that, when you do something, you go all in with it,” Young said.

The brothers have a special interest in graphic design, web development and filmography, which correspond with the group’s artistic interests, Cam said.

The group hopes to one day work on music full-time, rather than focus on a specific major, Nate Young said.

Cam Young said the hardest part about balancing the group’s music with their academic life is having to give up socializing.

“The hours we would spend with friends, we spend making music and finishing homework,” Cam Young said.

The group tries to go for a cinematic approach when producing their music, Cam Young said.

They want their music to be a positive influence among their audience, the kind of music people hear during an exciting moment.

“We want to get people hyped like it’s Friday night,” Christian Young said.

“She supports us financially and emotionally,” Nate Young said. “She’s basically the backbone of the group.”

Christian Young said Taffany Young has a lot of business ideas that she’s invested in the group. She encourages them to give their ideas their all.

“She believes we can make it more than we do,” Nate Young said.

Senior biology major Hillary Sklar was working at the Center for Sustainability table at the Rotunda when ItsFridayNite performed.

“I don’t usually like rap, but they sound pretty good,” Sklar said.

Junior accounting major Rhonda Norton said she enjoyed their performance and was excited to listen to all their music.

“I don’t see why they’re waiting [to release an album],” Norton said. “They sound amazing.”

Christian Young said the group will begin selling their merchandise, including hats, shirts and skits, when they come across a good deal.

ItsFridayNite has a website featuring links to their social media accounts and three of their songs.