Family and friends remember the life of Malik Jones 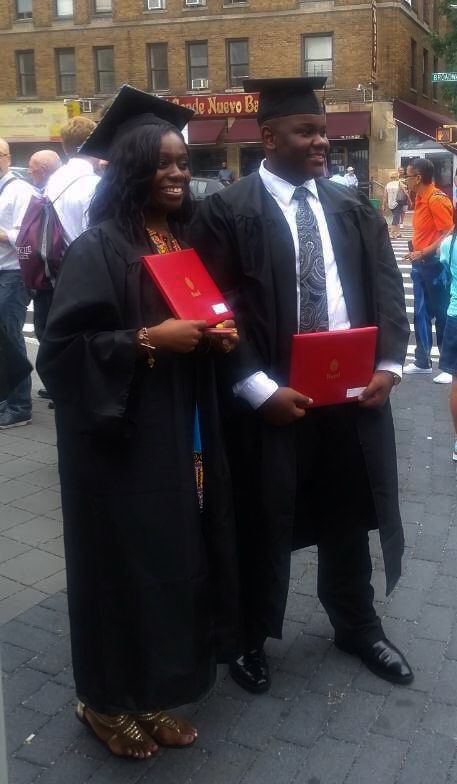 Malik Jones and his friend Diane Asante graduating from Bard High School Early College with their their Associates Degree in Liberal Arts.

Family and friends remember the life of Malik Jones, a student who was found dead in his apartment at Freedom’s Landing on Sept. 18

Jones was a junior business administration and management major at Georgia Southern. He also interned at Hertz car rental service in New Jersey over the summer.

Hertz assistant manager Kevin Romero said he only knew Jones from working with him during the summer, adding that Jones had great energy.

“His presence just lit up the room,” Romero said. “He was a young kid, a little wet behind the ears, but he was just so full of life. He did great work, did everything you asked him to.”

Jones’ mother, Lucinda Scotland, said her son’s internship at Hertz corresponded with his love for cars.

“When he was a baby, he would stare out the window at cars,” Scotland said. “When he was about five or six, he already knew about different cars and different parts, things that I didn’t think that a little kid would understand about cars.”

Scotland added that Jones wanted to one day open multiple luxury car dealerships of his own.

“Any kind of car service you needed, he wanted to provide,” Scotland said. “When we talked about it, there was the thought that we treated everyone with kindness and made everybody feel at home. We wanted to put that extra touch on it, make them feel special.”

A piece of his mother

Scotland said that Jones, her only child, was more than just her son.

“He was my best friend,” Scotland said. “Through having him, I was able to love unconditionally and have a deeper meaning of what life was about. He was so much like me. I was like, ‘How is this possible?’ For days, I would just look at him because he was so much like myself.”

Scotland said she dropped out of college to raise Jones but that he inspired her to go back when he was still in high school.

“He was going to be the first grandchild to graduate from college and the first one in my family to get their college degree,” Scotland said. “We were so proud of him. It was a big deal. We were looking forward to having this big extravagant celebration for him. Everybody from all over the states and family from Africa were going to come for his graduation.”

Jones decided to attend Georgia Southern because of his love for the state’s beauty.

“He absolutely loved Georgia, and I never understood why until I actually got down here,” Scotland said. “All the greenery, the open air and freshness, the friendliness of the people, it was like a reminder of a little piece of heaven.”

After learning of Jones’ death, Scotland said she didn’t believe it at first.

“There was still hope that maybe they had the wrong person,” Scotland said. “But deep down in my heart, I knew it was Malik. I never thought in a million years that God would take my son away from me.”

Scotland said she was sure of his death when she went to the coroner’s office in Atlanta to retrieve Jones’ belongings.

“There was this chain that I had given him on his eighteenth birthday of Africa,” Scotland said. “I knew it was final. He never took the chain off.”

Scotland said that having the chain comforted her as she made arrangements for Jones’ funeral.

“It has some of his DNA on it,” Scotland. “I felt like I had a little piece of him with me.”

Scotland said her last moment with her son was a FaceTime call the night before he died.

“We went to Walmart to buy LED lights. They were changing colors while we were talking,” she said. “Before we hung up, I told him that I loved him and he said ‘I love you too, Mom.’ And that was it.”

Scotland not only described Jones as a loving son but as a kind friend to all.

“He was always so kind, and he always found away to cheer up his friends,” Scotland said. “He was a voice of reason, even to me.”

Diane Asante, Jones’ friend and a junior journalism and media studies major at Rutgers University in New Brunswick, New Jersey, met Jones in the summer of 2012 at the New Jersey Law and Education Empowerment Program. Asante said that Jones’ energy immediately let her gravitate toward him.

“Being around Malik was always a joy,” Asante said. “He was the person you go to when you’re down and he played a lot. He was that friend that pulled you out of funk and left you laughing constantly.”

Asante said that, with Malik, there was never a dull moment.

“Recently, we were coming back from a gala and he was looking for his lint roller,” Asante said. “He pulled the car over just to look for that lint roller. He was about to turn around because he thought the valet stole his lint roller. Luckily, we found it.”

Breanna Bennett, another friend of Jones and a junior and mechanical engineering major at GS, said she met him at a clubhouse event for transfer students in Freedom’s Landing this past January.

“I was a transfer student trying to meet new people on campus, and he was there for a free meal,” Bennett said.

Bennett said that one of her fondest memories of Jones is of him trying to dance.

“He only knew how to do this old-school two-step,” Bennett said. “We’d both laugh about when he did it.”

Bennett said Jones was a brother, a jokester, a close friend and more.

“He’d always find some way to put a smile on your face,” Bennett said. “Malik Dante Jones was the sweetest person you’d ever meet.”

Services for Jones will be held Saturday in Newark, New Jersey.

If you wish to donate to Jones’ family to help with funeral expenses, a GoFundMe account can be found here.