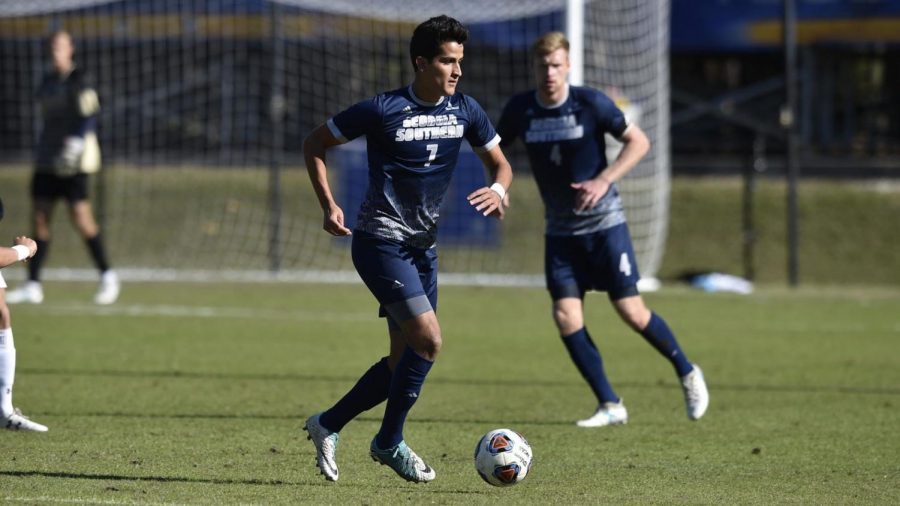 Georgia Southern came out on top in their home opener, shutting out North Florida 3-0.

Freshman Adam Davie continued to impress as he found the back of the net in the first three minutes of the game beating the keeper in a one-on-one.

The game continued to stay at 1-0 for the majority of the game, but the match was anything but boring. Both GS and UNF played fast and aggressively, and UNF become noticeably frustrated by their inability to score.

There was a good amount of pushing, shoving, and fouling. The match saw two yellow cards- one on GS and one on UNF. Eventually the aggressive game lead to a conflict which had to be mediated by the referee stepping in to calm UNF players down.

The Eagle defense was solid and composed as UNF continuously attempted to infiltrate and score. The few close calls there were in the back were easily defused by goalkeeper Jokull Blaengsson who had a total of five saves to secure the shutout.

“We started well to score a goal early,” Head Coach John Murphy said. “It should have settled us, but I think it unsettled us, and North Florida fed off of that.”

“The fact that we scored two goals in the second half kinda gave us a cushion, but Jokull [Blaengsson] had to be called upon to make some key saves to preserve the shutout,” said Murphy. “I think to not play your best and come away with a 3-0 win at this level is a good sign.”

GS outnumbered UNF on shots 19-9 and also outnumbered them on fouls 20-6. The Eagles played a strong game of possession and strategy as well as a smart game back in the defense.

The Eagles are back in action next Friday, September 7 as they take on Florida Gulf Coast at 7 p.m. at Eagle Park.