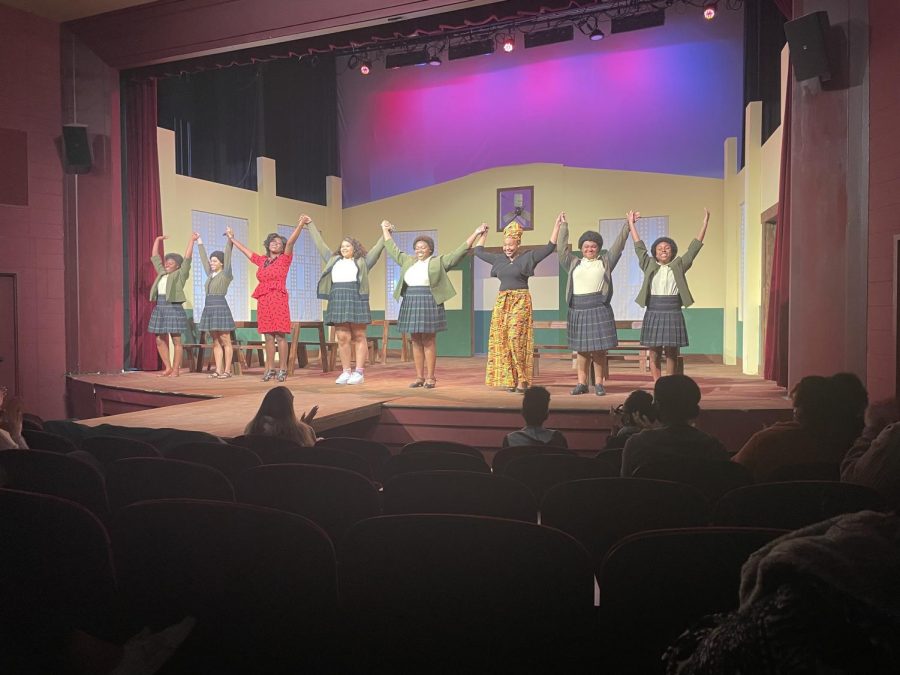 “The School Girls or African Mean Girls Play” held Nov. 16-19 here on the Armstrong Campus was captivating to watch. The play highlighted the similarities and differences of teenage girls around the globe. The play, directed by Visiting Assistant Professor Tomica Jenkins, garnered consistent laughs and entertained the audience.

The play had an all-African American cast with

The casting choices were stellar. All actresses spoke in a convincing African accent that conveyed a feeling of originality. Moreover, it spoke more to the significance of an act to feature an all minority female cast, which in my opinion, should be done more.

The play is set in 1986 Ghana at Aburi boarding school; it focuses on five girls from the school, all hoping to become Miss Ghana. A confident and often arrogant Paulina led the girls. In her mind, she should be Miss Ghana, and no one was going to get in her way. However, the group is thrown for a loop when a new charismatic girl Ericka comes to the school and, in a sense, takes the place of Paulina.

With Paulina being one of the most remarkable characters from the play and essentially being the main character.

I spoke with Javanna Rogers, a theatre major here at Georgia Southern, and she talked about the thing that she liked most about her character Paulina. “I love a lot of things about Paulina but the thing I love most about her is her drive to keep going,” said Rogers.

The play delved into various topics, but things that stood out the most included colorism, self-hate, and friendship. The cast was able to meet the difficult assignment of illustrating the fantastic script by Jocelyn Bioh.

The play was hilarious, though, with every cast member drawing at least one laugh from the audience. The hysterical nature of the play was captivating and propelled the more serious scenes scattered in the play.

However, some scenes that come to mind that speak to the power of the play include a scene where Paulina bleaches her skin. Truthfully it was a tough watch as it was the epitome of self-hate, but it called attention to the reality of some girls who feel the need to be of lighter skin complexion. This reality is caused by societal beauty standards perpetuating and continuing to brandish unattainable, unnatural appearances.

Another quite dynamic scene was where the Miss World pageant top ten got revealed; the girls were eager to see Ericka in the pageant and were sure she would get chosen to be in the top ten. However, she wasn’t, and the girls that the judges chose all had fair to medium skin, even the contestant South Africa, who the girls detested being a white woman. This scene subtly addressed the problem of colorism which is a descrimination of one’s skin tone.

The magnificence of the play was accentuated by the scene that surrounded it, the Jenkins Hall Theatre holds about 50 people, and I would say that it was about 90% complete with only a few seats open. Moreover, an invested audience kept laughs going, which helped fuel the actresses.A proximate stage also aided in putting forth a good atmosphere unrivaled by any I’ve ever seen here on Armstrong.

Jenkin directed the play well. This is evident in the stage blocking, costume design, and portrayal of the script. Actresses were flawlessly staged, and the costume design choices displayed an 80s African image. As aforementioned, this was all capped off with great acting, which was the most considerable evidence of eminent directing.

With the success of the production it is almost certain that challenges were encountered.

Therefore I spoke to Danielle Ponquinette, a graduate who portrayed Ericka, and she spoke to the challenges of producing the play. “I believe the biggest challenge was trying to make it an authentic experience for everyone, this is something that should not be sugar coated, it should not be made to be completely jokes and caricatures, this is things that black women face every day,” said Ponquinette.

Overall, though, “The School Girls or African Mean Girls Play” on the Armstrong Campus was a success. I urge all students to watch it as it is highly entertaining and is worth the time spent. The play puts forth some serious topics; however, they don’t allow them to be overbearing, and coupled with the play’s humor, you are sure to be pleased by this production.