We asked you: What are your thoughts on justice after recent BLM-related trials 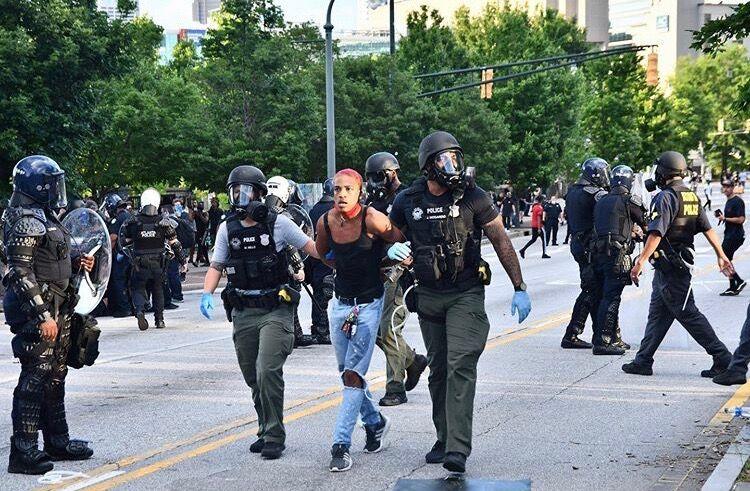 Tahli Viner, an incoming junior psychology major, was taken in zip-tie restraints after protesting in Atlanta during last summer's BLM protests. Three GS students were tear gassed and arrested while participating in protests on May 30, 2020.

The acquittal of Kyle Rittenhouse, the conviction of three men in the murder of Ahmaud Arbery and the jury verdict that white supremacists must pay damages for the violent Charlottesville demonstrations have caused civil unrest among the public with rather strong opinions on either side.

Students and staff across both campuses too shared their own thoughts on these recent cases, showing a similar division.  Many of them found hope in the progression demonstrated by these trials, but there was still a resolve on progress that was yet to be made.

“Two out of three is a good start, but we have to look at the systems in place that have allowed for vigilantism to flourish, that kept the charges of murder for Ahmaud Arbery delayed, and gave space for the Charlottesville demonstrators to move into violent actions,” said GS faculty member Lisa Abbott. “I am hopeful that we are moving away from just turning a blind eye to injustice, but that change will not be easy.”

“I believe that the conviction of the three men who murdered Ahmaud Arbery opposed how the media negatively portray America’s judical system, especially their depiction of it after the acquittal of Kyle Rittenhouse,” an Armstrong student said. “I hope both cases give hope to both right, left and center politically that our government gives everyone a fair trial, that it follows the facts and the law no matter your color or creed.”

“These verdicts show that our justice system is slowly improving after the summer protests of 2020 but we still have a way to go,” said Joe Rocheleau, a GS student. “When a judge says a prosecutor can’t call those who Rittenhouse killed “victims” it shows a clear contempt for human life.”

“It’s upsetting that the police, those who are supposed to protect and serve, often put the best interests of the people below their personal feelings and that racism is so intrinsic in the justice system,” said GA Southern student Loren Shepherd. “It’s good though that justice was finally served and the men who killed Ahmaud Arbery in cold blood have been convicted.”

Other students completely disagreed with outcomes of at least one of the cases, specifically the verdict of the Rittenhouse case. The prospect of self-defense and gun regulations stood as a point of debate for many, which sparked a further controversy concerning morality in America.

“It’s crazy to me how Kyle Rittenhouse actually got let off for self defense when there were so many other questions that should’ve been raised overall,” one GS student said. “It shouldn’t have taken that long for Ahmaud Arbery to get justice, but hey that’s our country for you.”

“The Kyle Rittenhouse case was a circus; there were many missteps during the trial,” another GS student said. “Personally, there should have been no reason for that young man to be carrying an AR even if it was for “protection.” The Ahmaud Arbery case showcased how the justice system should be. Those men committed a calculated crime that cost the life of a young man. Any person committing a crime should pay the price of restitution and damage.”

A few students agreed collectively with all three verdicts, despite their lingering reserves.

“I do have some questions regarding the felony murder doctrine application in [the Ahmaud Arbery] case,” said online Southern student Michael Humber. “Initially, I wasn’t sure how the citizens arrest issue would weaken the prosecution’s case but the testimony of the defendant shooter took care of that concern.”

“I’m glad justice was served but sad it took so much to get to this point,” said GS student Candance Dickerson.