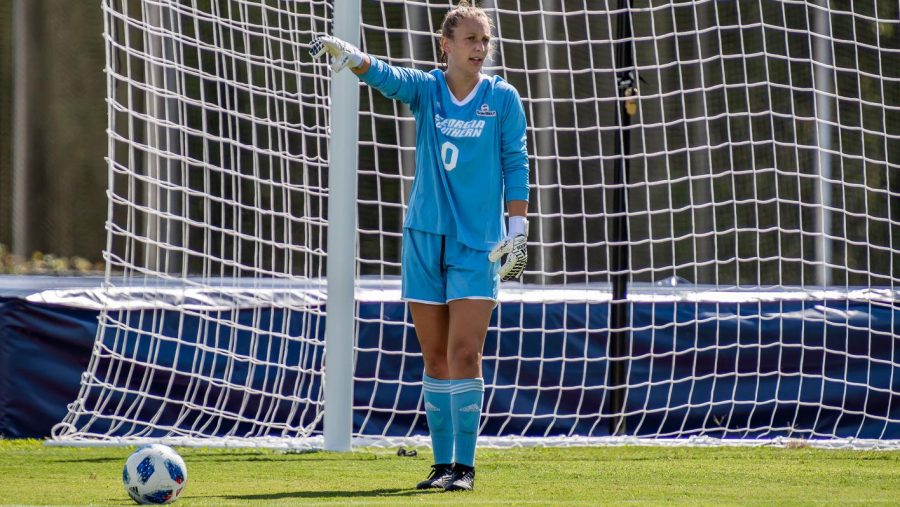 Georgia Southern soccer has had two athletes named Sun Belt player of the week—Javier Carbonell for the men’s team and Jocelyn Springer for the women’s.

Redshirt senior goalkeeper Springer was named defensive player of the week after her exceptional performance against Georgia State Friday night where she collected her second shutout of the season.

In the match against Georgia State alone, Springer made seven saves and has notched 36 saves for the total season. The goalkeeper also has a 1.31 goals against average as she’s played in seven games this season- starting six of those.

Senior forward Carbonell was named offensive player of the week after his exceptional performance Saturday- which was also recognized by three total organizations for his play as well.

The forward from Madrid scored four goals in four different ways to aid Georgia Southern to a come from behind win over Jacksonville University.

Carbonell found the back of the net off a penalty kick, a free kick, a header, and a strike during his time of play making him the first player since 1999 to score four goals in a game and making him one of three Eagles to accomplish the statistic.

This is Carbonell’s second Sun Belt player of the week award of the season and fourth of his career.

Carbonell was also recognized by Top Drawer Soccer and College Soccer News for his play earlier this week.

Both teams will be back in action this weekend at home. The men will host ETSU Saturday, Sept. 22 at 7 p.m. and the women will follow by hosting rival Appalachian state at 1 p.m.Sunday, Sept. 23.