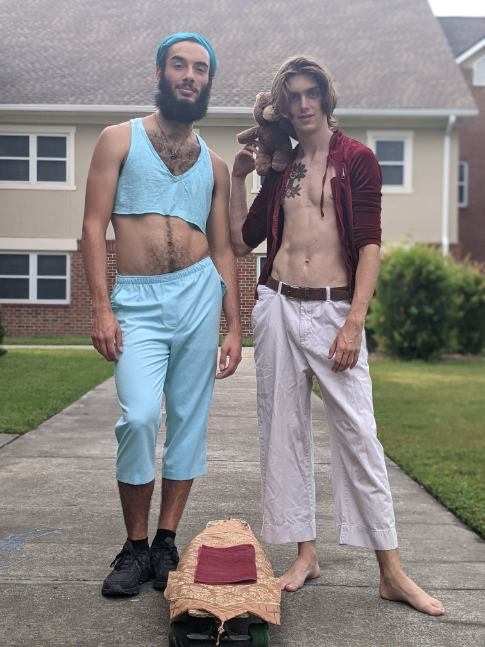 The Georgia Southern University’s Armstrong campus is full of diversity and joyous energy. Ranging from the students who skate to class to students who participate in intramural sports for fun, this campus is amazing with all walks of life from anywhere to everywhere.

However, the questions that should be asked are: Do we really know each other, and who we are as people?

Introducing this new segment, the George-Anne Inkwell staff will randomly select students, staff and teachers on campus and give them an opportunity to explain who they are and what their story means to them in life. This segment will be known as “The Faces of Armstrong,” bringing light to those who may not be known of or those you just see in passing every other day. One familiar face among the students of Armstrong is Jace Reilley.

Jace Reilley, currently 19 years old and a Sophomore at the GSU Armstrong campus, was born and raised in the Savannah area. Growing up, Jace was the middle child between two brothers and lived his life to the fullest each day. On campus, you see him skating around, either shirtless showing off his tattoo, balancing and dancing on his custom bamboo wood longboard or soaking in the sun, smiling and saying hi to whomever he sees.

Many people see Jace and mostly know him through his artistic movements while he brightens up anyone’s day. During my semesters on campus, whenever you wanted to talk about Jace, all you had to do was mention someone dancing on their longboard, and immediately that person knew who you were talking about. With this in mind, why don’t we get to know Jace directly?

Inkwell Staff: Alright Jace, tell me about yourself and your overall experience here at Georgia Southern!

Jace R.: I mainly identify myself by my interests and my friends. As a whole, the community I live in is definitely the biggest extension of myself; not to mention my passion for skateboarding. My other hobbies consist of cards, “Magic the Gathering” and video games within a group setting.

My overall experience on campus has been everywhere. Coming into college, I had an introverted lifestyle and wasn’t really interested in breaking that trend. I know people were quick to talk to me and they were super friendly but I wasn’t interested. I resisted it pretty hard until I met the other skaters and I was like, “alright, I’ll meet these people.”

After that first semester, I attended a kayaking event hosted by the school, and there I met Bryce Bermudez, who introduced me to the concept of making friends based on how nice they were and how helpful they would be to me in my life. Since then, things have drastically improved.

The biggest thing that led to me meeting more friends was just kind of coming out of my shell and just being more cognizant of who I wanted to be friends with and then not feeling bad about just going up and talking to them. For example, flailing both of my arms about whenever I see someone that I recognize.

Inkwell Staff: What are you majoring in and your favorite class you’ve taken at Georgia Southern?

Jace R.: My major is political science so that I can take that and lead into becoming a fire chief. I’m only majoring in political science because the school does not offer a public administration major on this campus, but that’s the plan.

The thing about becoming a fire chief is, it’s like an elected position. So it’s like, there’s no real efficient way to achieve that position. You could be just be doing whatever and become a fire chief theoretically, but you know, you want anything that’s going to help you get up there. So if I become a firefighter with a degree in something related to the political science degree field, then that can hopefully help me.

The truth is I hate politics. I want nothing to do. If I was president, the first thing I would do is ban politics. But at least this is a related degree.

I think my favorite class had to have been Government with Professor Tecklenburg because she is such an amazing lady and she made that class so fun. There was never a dull moment around her and in that class. History and government teachers have always been my favorite. I’ve never heard of a an unlikable history teacher

Inkwell Staff: Is there anything you would like to add?

Jace R.: Yes! You don’t have to worry about asking me how to skateboard. If you want to ask me how to skateboard, I’m happy to teach you some, like, weird steps. But it’s literally all balance. It’s entirely something you have to figure out on your own by stepping on the skateboard. There are no real tricks to just riding a skateboard. You just…I’m sorry. Um, yeah, I was bottling that up for a while..haha.

Everyone always says they see me skateboarding and they’re like, “Can you teach me how to skateboard?” and I can’t teach you. You just step on the skateboard and your body has to learn on its own.

One piece of advice I would like to give is, “Your level of success, will be determined by how well you are prepared and if you have a good work ethic”.

Are you interested in being chosen for the next Face of Armstrong? Make yourself known or stand out from the crowd!! You never know, we may select you!