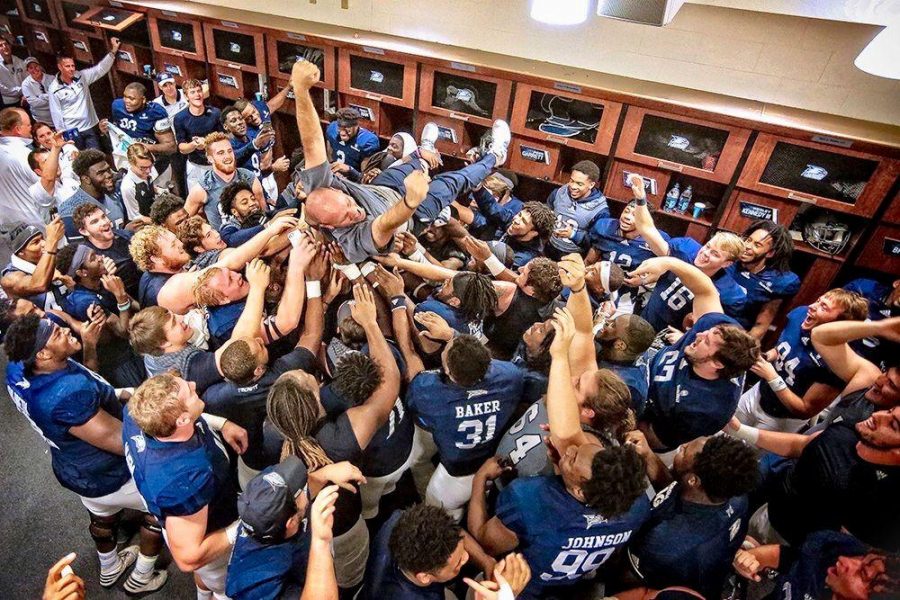 This picture of Lunsford crowd surfing with his team after the 52-0 victory over South Alabama is on Lunsford's wall in his office.

Head football coach Chad Lunsford’s office is exactly as one may assume his office would look like. A big desk takes up one half of the floor as a couch sectional and a black coffee table grace the other side. Old game balls, pictures and memorabilia line the desk and drawers. Hung on the wall is more memorabilia and pictures with silver frames. One of the pictures that the head coach points to is after the senior day victory last season.

“The picture right there is not perfect,” Lunsford said. “It’s killing me. It’s one of those double nailed frames. I hate them.”

He was commenting on the frame that was ever so slightly crooked. Sitting more than five feet back, I could barely notice the shift in the frame. But, Lunsford was fixated on the slant of the frame. This maniacal attention to detail paired with his emphatic infatuation towards Georgia Southern earned him the head coaching position as well as a restored faith in the Eagles football team.

Hailing from Elberton, Georgia, the largest city in Elbert County with just under 5,000 inhabitants, Lunsford has taken the long, but rewarding path to his first head coaching job. Beginning his career as a student assistant at Georgia Military College, Lunsford always had the dream of being at the helm of the program.

“My goal was to become a head football coach, not necessarily at Georgia Southern,” Lunsford said. “The opportunity presented itself and I’m very excited it is at this place because this place is very unique, very special. It’s something I don’t take lightly.”

Lunsford has had two separate stints with the Eagles, having worked under four different head coaches. He’s been “fortunate” to see the program at its highest of highs with the three trips to the FCS Semifinals to the winning of the Sun Belt in 2014. Seeing the team at its best and seeing it at its worst last year, he is well aware of where the program can be and understands the pressure to return to the level it once was.

“It’s important to always have a positive atmosphere,” Lunsford said. “If you come to work with a negative mindset, it bleeds into everyone else.”

Even with the added expectations after the solemn season that was 2017, the aura across South Georgia created by Lunsford, his coaching staff and the team has remained hopeful. Few expect an undefeated season, but there is ambience that has fans and critics alike believing in a team that was at the bottom of college football last season.

For the players and coaches, Lunsford credits the maintained positivity to the buy-in.

“All the coaches are on the same page. At the beginning, you have to set standards and expectations,” Lunsford said. “It’s always different for the players when it’s a new head coach and staff, but they did a really good job of buying in and holding themselves to the standard. Now, what I really like is that they are pushing to exceed the standard.”

The standard attached with GS football is to be the best. Six national championships, though FCS, was unprecedented and stood alone at the top until North Dakota State won its sixth in seven years last season. 65 consensus All-Americans have donned the blue and white and only Notre Dame, Ohio State, Michigan, USC, Oklahoma and Alabama have had more. The Eagles went 8-0 in their first year in Sun Belt Conference play, something that had never been done before and hasn’t happened since.

But the record that Lunsford kept alluding to was the home-record. Since the Eagles began playing in Paulson Stadium in 1984, GS is 172-39 for a .815 win percentage.

“Paulson Stadium is a very special place. The home record here is one of the top in the country and a lot of that has to do with the atmosphere,” Lunsford said. “I definitely don’t want to see anything like that drop off. Game one all the way to the last home game, it needs to be packed.”

The Eagles will have the opportunity to build upon their outstanding record in Paulson Sept. 1 against FCS school South Carolina State, which many fans are regarding as an easy win. When asked what the most important game of the season is, Lunsford, with a smirk on his face, responded: “South Carolina State.”

Something that has been unique with Lunsford is his usage of social media. The gifs are plentiful and the uplifting motivation is abundant. Not many head coaches have approached social media regarding promotion and using it as a recruiting tool.

“When we start talking about social media aspects, I like social media in that it allows us to put Georgia Southern out there,” Lunsford said. “When you make it fun, it attracts people so I do think it’s important. Social Media can become an issue when it becomes not team-based.”

In just the past nine months he has been head coach, Chad Lunsford has managed to transform a culture back to the way it was. The gusto in this team’s supporters is one of the most positive in the country, certainly the highest morale as far as new coaches go.