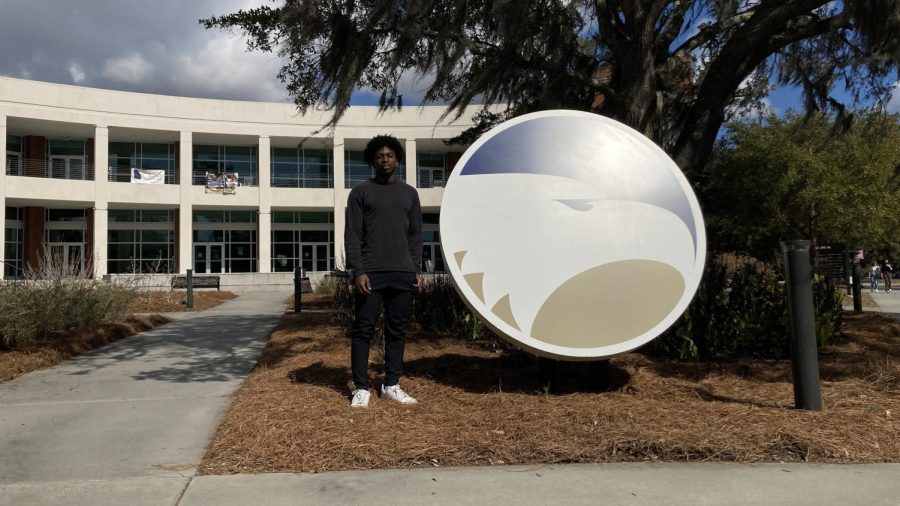 Rylan Artis posing next to the logo outside of the Student Union building.

The Georgia Southern University’s Armstrong campus has diversity and lots of joyous energy. Ranging from the students who skate to class to other students who participate in intramural sports for fun.

This campus is amazing, with all walks of life from anywhere to everywhere. However, the question that should be asked is, do we know each other and who we are as a person? Introducing this new segment, the George-Anne Inkwell staff will randomly select students, staff, and teachers on campus and allow to explain who they are and what their story means to them in life.

This segment will be known as “The Faces of Armstrong,” bringing light to those who may not be known of or those you just see in passing every other day. Introducing a familiar face among the students of Armstrong is no other than Rylan Artis.

Rylan Artis, currently 19 years old and a Sophomore at the GSU Armstrong campus, was born and raised in Marietta. Rylan’s first college choice was Georgia Southern which he attended the Statesboro campus but decided to switch to the Armstrong campus because of a career change to Med Lab Sciences.

However, before the campus and Major change, Rylan took 18 credit hours of classes juggling many classes all at once.Still, he was able to show resolve and maintain a grade point average of 95 or higher out of all of the classes. With this in mind, why don’t we get to know Rylan Directly?

Rylan A.: So at first, it’s actually a funny story, I kind of accidentally joined the Honors Program. I say accidentally because I was filling out the scholarship application, and then it was like a couple of questions that didn’t go through too much. Then I ended up in the Honors Program. So that’s kind of what because at first, I was leaning towards Georgia State when applying to colleges. Once I was accepted, I made the decision to come here. Plus, the price of tuition was pretty good down here. So that’s what kind of motivated me to come. Those two things added together and that the campus is nice, minimal debt, and you’re still getting everything you would get otherwise. So that’s what motivated me to come to Georgia Southern.

Inkwell Staff: I heard you had taken 18 credit hours the past semester. What did you do, or well, how did you go about it to achieve such an amazing goal?

Rylan A.: So I’ll say, I’m glad I had because 18 credit hours were science courses, and then two of those credits were a required physical health class. I had soccer for two credit hours. So that kind of helps, but as far as the science classes go. The beginning part of the semester was more lenient, but then as the semester progressed, it kind of ramped up and as a result. I spent a lot of time in the Learning Commons studying. Like if you go there, I’ll probably be there just at any time out of the day really. I was trying to study and figure out what study techniques worked for me through trial and error. And so after I found the best ways to study for each class, it kind of got easier and more routine. That’s how I was able to maintain such a high grade.

Inkwell Staff: Out of all the study habits you have tried, which one was the most successful?

Rylan A.: It’s hard to say one specifically because it does depend on the class. I’ll say specifically for anatomy a lot of it was I would write everything myself from memory. So I’d take the time and kind of draw both anatomy, and I would say the steps in the physiology like out on paper and then fill in the gaps after I saw what I knew and didn’t know. And then, for a class like organic chemistry, I would focus on making sure I knew everything I needed to know. Yeah, what I have to know is that I can commit everything to memory and focus on understanding as well.

Inkwell Staff: Out of all of the classes you have taken, which one was the most difficult?

Rylan A.: This year in general since I’ve been here, has definitely been soccer. You know how the school requires for every student to take some sort of a physical class? The school had soccer as an option, and I was surprised too when I figured that out. however, if you’re looking for a class other than that, to be honest. It’s easier to work on classes you’re already interested in. So even for an easier class, composition, it’s difficult if you have little to no interest in it.

Inkwell Staff: Managing all these classes, did you have any free time? Or what were your hobbies to ease your mind? If I was in your shoes, I would be overloaded, haha.

Rylan A.: I did have a lot of free time towards the beginning of the semester. Last year was COVID. So what I want to do outside the class, but this year is like going out here and there like hanging out with friends, roommates, going to the gym every so often because I feel like it’s kind of I don’t want to say impossible. Still, it’s important to have a balance of what’s my class or obligations so that’s why I feel like the biggest thing when it comes to classes is time management. S. So if you can do that, it’ll be easier to like and feel like you’re doing good. Or it’ll be easier to get through things and you’ll be more efficient with your time so that’s another thing I kind of own with classes I like. I really hopped off of social media when I first started college like kind of gone all the way. And so it’s easy to waste time. Like even if it’s easy to just like five minutes, go back to the wiki because that definitely helped a lot like

Inkwell Staff: That’s an excellent take on that, which leads to my next question. What’s your overall experience at Georgia Southern? Which campus do you feel is better in preference? Armstrong or Statesboro?

Rylan A.: That’s honestly a conflicting question. I’ll say personally, so far, I enjoy my time. It’s hard to say. I say so far, I like a small campus field, especially in classes, because I feel like the professor is engaged with the students. Personally, I say…haha…yeah, as far as that goes like the campus size, I definitely like the smaller campus size, but let’s say Statesboro, it is fun outside of class; it’s just a lot more people. However, it is also nice here at Armstrong, and we have downtown Savannah to hang out and whatnot. In terms of classes, I prefer this campus because of the easy one-on-one engagement for students.

Inkwell Staff: Is there anything you would like to add? Any Advice?

Rylan A.: Another important thing I would like to add is that any material in any class is capable of learning and mastering. It’s just a matter of trying to be efficient with your time and seeking help if you need it because that’s also important, but you should know that like you’re capable. So I’ll say you shouldn’t start to give up on a class if you don’t do well as you would like to. Just take the time to practice that material and stay efficient with your time.