Mocs get best of inexperienced Eagles 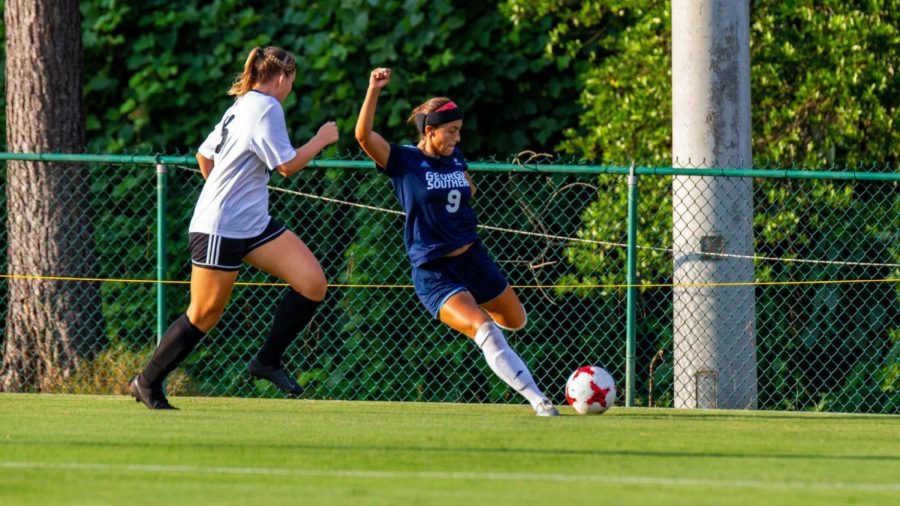 Senior defender Junique Rodriguez has played 112 minutes through two games for the Eagles. She had one shot on goal in the loss Sunday to Chattanooga.

After being shut out against Florida Gulf Coast in their first game of the regular season, the Georgia Southern women’s soccer team set out to get their first victory of 2018 in their home opener against Chattanooga.

Things didn’t go as the Eagles had planned against the Mocs as the Eagles once again failed to find the back of the net, and fell to Chattanooga 3-0.

The Mocs jumped out to an early lead, when Bailey Gale scored 17 minutes into the game.

The score remained 1-0 until the second half, where the Mocs came out hot. Chloe Arnold increased Chattanooga’s lead to 2-0 with her goal within the first two minutes of the second half.

Arnold put another in the back of the net in the 65th minute, to seemingly put the game away for the Mocs.

The game marks the second straight loss in which the Eagles have failed to score, which is definitely not the way they anticipated on starting their season.

Even though the Eagles were able to outshoot the Mocs 13-9, they could not capitalize on any of their chances.

“Chattanooga finished their opportunities, fair credit to them,” Dunleavy said.

The Eagles, still in search of their first goal, and victory,  on the year, will host Jacksonville State on Friday, August 24. Kickoff against the Gamecocks is set for 7 p.m. from Eagle Field.