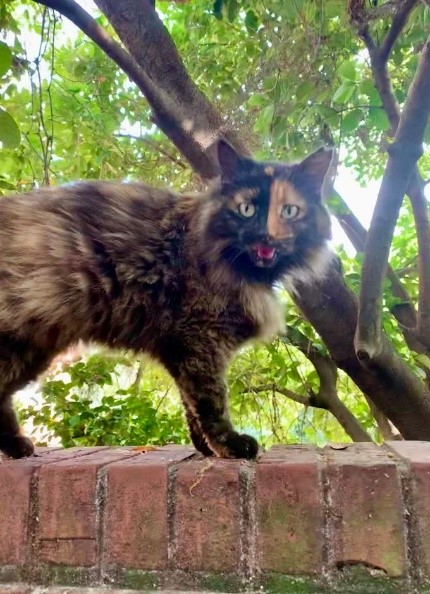 Sienna standing on the brick fence of the Lane Library courtyard

Hello, Georgia Southern University, and welcome to the Faces of Armstrong! This week, our special guests are the friendly cats on campus. Sure they are not students on campus, but they bring an array of sunshine to students and staff who volunteer their time to feed and take care of them. In addition, everyone on campus has seen the cats at least once or twice on campus. With the help of Mrs. Yarley, one of the members of Friends of Cats, let’s get to know the cats on a more personal level.

In total, there are five feeding sites around campus. Starting with the first feeding site, near the Lane library in the nearby courtyard, we have Sienna. Who is one of the oldest cats in the courtyard amongst the three other cats? Sienna’s age is unknown but is believed to be 12 years old, born in the summer of 2010.

Mrs.Yarley: “Sienna is a long-haired Tortie cat, with a mixture of brown and tan which makes her really noticeable. I’ve been feeding her for six years. When I first started feeding the cats in the courtyard, Sienna was more receptive to me. I often tell new feeders that when they go out to the library courtyard, Sienna is probably going to be the more receptive and willing to “kind” of let you pet her in the end. When I’m busy, one of my coworkers will feed for me. Now Sienna will rub up against her when she goes to feed so Sienna will warm-up to people more than the rest of the cats out there.”

The Second cat we are showcasing is Cowboy, living at the second feeding site behind the police station. Cowboy is an all-around loveable cat. He first appeared on campus as a fully grown adult in 2020, possibly four or five years old. When being introduced to the cats and helped Mrs.Yarley feed them, Cowboy was one of the cats that approached me and let me pet them. Hands down, Cowboy is one of my favorites, along with a few others at the other feeding sites.

Mrs.Yarley: “Cowboy is a big old black and white cat. He’s got a really goofy personality in my opinion and is very receptive. When he first appeared on campus a few years ago, I think he was fully grown and he was pretty injured the first time we saw him. We were really worried about him, but Barbara, who is the president of Friends of Cats, gained his trust, got him trapped and neutered. And he came back being the most cuddly cat ever. He’s just a really goofy kind of cat and he’s really receptive to feeders. It seems like everyone can pet him and he really enjoys having his head pet. He has kind of teamed up with one of the cats named Tela and they became BFFs back there.”

The third cat on campus at the third feeding site located at the corner of Compass Point DR is Niko, one of my favorites. Niko’s age is unknown but is assumed to be five to seven years old, appearing on campus in late 2017. Being a cream-colored cat with gorgeous blue eyes and a friendly personality, Niko makes him one of the most stand-out cats of the bunch.

Mrs.Yarley: “Niko is very, very friendly and seems to like the company of other cats. He was at another site before he moved to where he lives now. He joined up with those cats because there were more of them, and they were willing to accept him. I could always sense that Niko wanted a friend, and he had one cat friend at the last feeding site named Dusty. However, Dusty was really old and eventually passed away. OnceDusty died, Aggie, who was the other cat at the site, wanted nothing to do with Niko and he was probably like, “let me go find some cats that will accept me,” and fortunately he found Chess, Olivia, and Casey at the site he is at now. It is interesting how the cats on campus will rotate and find cats who will accept them. Many of them like to partner up or have their little cat posse, as I like to call it.

The fourth cat on campus is Cinder, located at the fourth feeding site near the free parking lot. Cinder assumed to be 13 years old and appeared on campus in 2009, living life by herself independently. She’s a cute solid black cat that is food motivated and enjoys the campus area.

Mrs.Yarley: I remember when I first started feeding Cinder, she would kind of show up in the library courtyard but eventually, she settled down over there.

The fifth cat living at the fifth feeding site is located near University Hall is Sophie. Sophie is believed to have been born in 2008, fitting a solid black depiction. I usually see her chilling on the sidewalk near University Hall, sightseeing, either staring at the humans or walking around doing her thing.

Mrs.Yarley: “Sophie is just a sweet little black cat. I feel like a lot of students will see her on the sidewalk. I get a lot of comments at the library asking who’s the little black cat off the sidewalk near University Hall, and I’m like, “Sophie?”. She’s also kind of a cat that likes to be on her own. She had a partner named Raven. As I said, some of the cats will team up and have BFFs. So her BFF was a cat named Raven, and I miss him. He was a chubby black cat with cross-eyes, and when you fed him, he would be right under your feet. He was a very lovable cat who loved being pet by the feeders. However, he passed away due to complications of FIV (Feline Immunodeficiency Virus). Sophie did mourn Raven’s loss, and it was devastating to go over there to see her so distressed. But now Sampson lives over there. She has not taken to Samson, so I never see him when I feed on Friday afternoons. I think he likes to eat and run..

Are you interested in being chosen for the next Face of Armstrong? Make yourself known or stand out from the crowd!! You never know; we may be watching and selecting you!