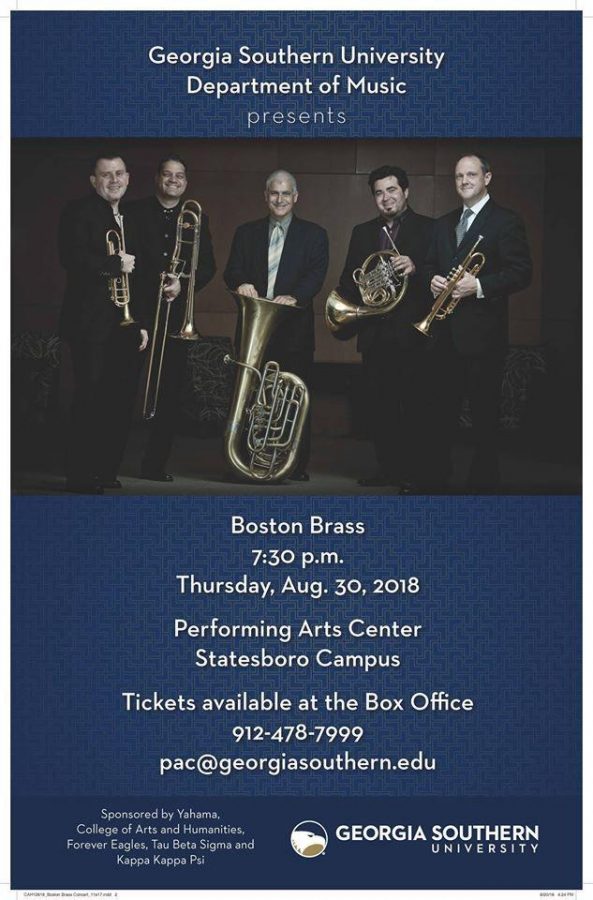 The Boston Brass, a brass quintet based out of Boston, Massachusetts, founded in 1986 is coming to Georgia Southern University to hold a series of master classes, perform a concert and play at halftime with the Southern Pride Marching Band at Saturday's football game.

The Boston Brass is coming to Georgia Southern University to hold a series of master classes, a concert on Thursday and play at halftime with the Southern Pride Marching Band at Saturday’s football game.

According to their website, Boston Brass, a brass quintet based out of Boston, Massachusetts, was founded in 1986 and has spent the last 31 years performing all over the world.

Additionally, Boston Brass has been featured on The CBS Early Show, National Public Radio’s Performance Today, and The Great American Brass Band Festival. They have also recorded many albums through the years, the music on the recording ranging from classical to popular.

Daniel Haddad, Ph.D., associate director of bands and director of athletic bands at GS, talked about the upcoming events.

“They’re doing a four-day residency, which includes a solo concert, three clinics, rehearsals with the marching band and the Band Day students, and then the performance for the first game,” Haddad said. “It’s a great experience for the students.”

Boston Brass’s will also hold a solo concert Thursday at 7:30 p.m. in the Performing Arts Center. Ticket information is available on Etix.

Boston Brass will also be playing with the Southern Pride Marching Band and Band Day students at Saturday’s football game in Paulson Stadium.

“I’m very excited,” Hannah Dyar, a sophomore music education major and member of the marching band, said. “I think it’s going to be a really great experience, both for the audience to watch and for the members of the marching band to get to play with them.”

“The Boston Brass is a very prestigious group, and I feel very honored and just very stoked to be able to perform a show with them in front of our fans,” Jackson said.