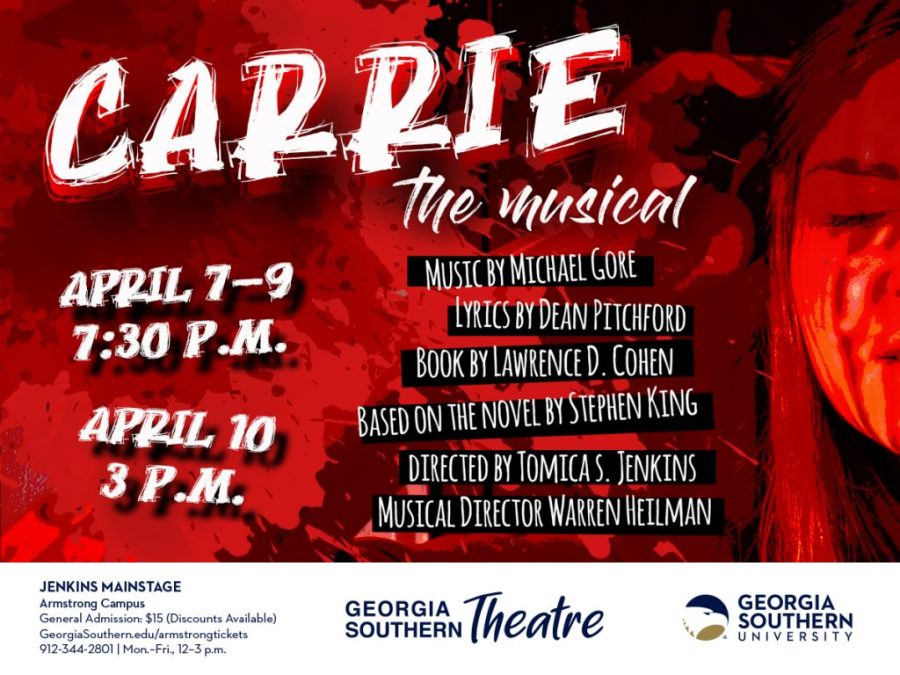 Promotional poster for Carrie The Musical

On April 7th, 2022 the Georgia Southern Theater Department on Armstrong Campus will premiere Carrie: The Musical.

“Carrie: The Musical is based on the classic 1974 gothic horror novel Carrie by Stephen King. The story focuses on an awkward teenage girl, (played by Javanna Rogers) whose telekinetic powers emerge at the onset of puberty, her lonely life is dominated by an oppressive, abusive, and fanatically religious mother (Joanna Sellman). Carrie addresses many themes including teenage angst, bullying, abuse of power and self-doubt,” said Tomica Jenkins, the director of the production.

“I chose this play for its wealth of powerful female roles. We have so many talented women in the theatre program, I thought it would be an opportunity for them to shine,” Jenkins continued.

“If I were to sum up this production, I would say this show is akin to the musical Matilda, but bloodier and more seriously deadly.

“What strikes me most in the play is the demonization of womanhood, how Carrie is bullied and abused, BY WOMEN in particular, for a simple biological function and vilified as evil as a result of the inevitable evolution of adolescence.

“The lyric from the play, ‘Once you see you can’t unsee,’ encourages viewers to call out bullying behavior when they see it. And one of the final lyrics of the play, ‘What does it cost to be kind?’ will hopefully be the audience’s takeaway.”