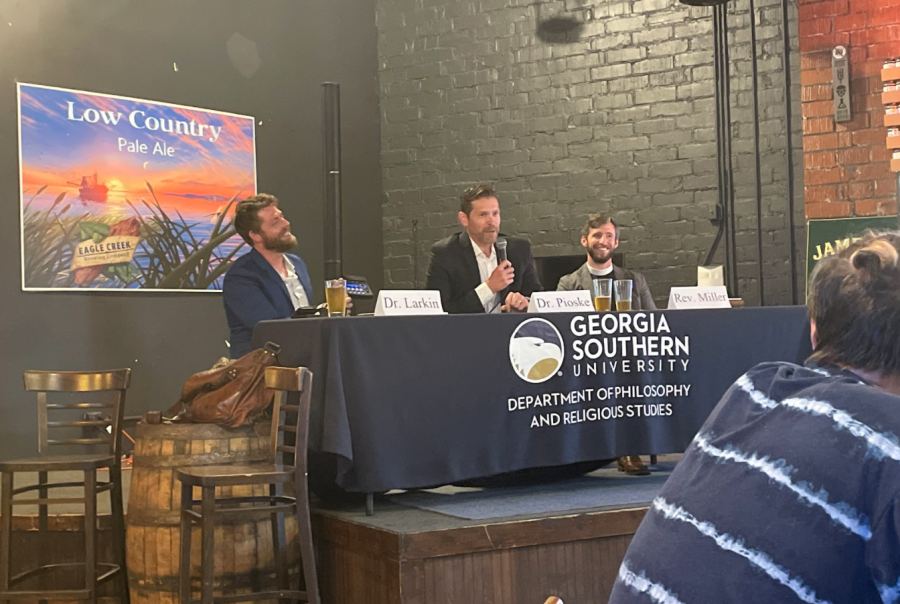 Most people do not expect religion and philosophy to be in the same conversation. Often, the two subjects can be seen as oppositional. In 2020, Georgia Southern faculty member, Dr. Dan Larkin, decided to challenge this stigma by creating “Religion on Tap”.

“Religion on Tap” is a series of open discussions related to deep theological/philosophical concepts. It’s held at Eagle Creek Brewery monthly and everyone is encouraged to attend. The event is a good opportunity for people who want to think on a deeper level about their beliefs.

“It’s just fascinating to see how different points of view, coming from different denominations or different sorts of academic positions, can really sort of open people up to this discussion,” Larkin said. “They can start examining their own currently held beliefs and then maybe come to realize that there might be some challenges that need to be addressed.”

The conversation is led by three panelists including a philosophy professor, a religious studies professor and a local religious leader. The latter portion of the event includes a 45 minute Q&A session amongst the audience. It gives the audience a chance to challenge the experts’ opinions or express their own opinions.

Audience members consist of mainly GS students along with Statesboro locals, who are encouraged to ask the panelists thoughtful questions about the particular topic. Previous topics include “The nature of God”, “Hell” and most recently the problem of “Scriptural Interpretation”.

Larkin’s goal behind starting “Religion on Tap” was to show that religion and philosophy are not as diametrically opposed as they are often thought to be. The event accomplishes this by bringing different viewpoints to an open forum. With three different experts on particular subjects, many opinions are presented and discussed about a specific topic.

“It gives the community a chance to talk about these topics, by showing the differences and how they work together,” Larkin said. “The objective is not for the panelists to debate, but to reach a consensus.”

Each “Religion on Tap” discussion averages about 80 to 100 students in attendance. Many attendees are “returners”, and enjoy going to listen and think deeply about the topics. Previous intense topics, like “Hell”, can make students’ beliefs stronger or cause them to question them. Either way, listening to the discussion forces the audience to ponder on these topics.

“Religion on Tap” gives students an opportunity to participate and ask questions. “I’ll come again because I just, I want to learn more,” said senior Lea Evans after attending her first discussion. “And it’s just a good way to learn new things that I don’t really think about.”

The next opportunity to attend “Religion on Tap” will be April 19 at Eagle Creek Brewery. The event begins at 7:00 p.m., but from my experience you want to get there early to find a good seat and grab a snack.