Jensen gets fired up 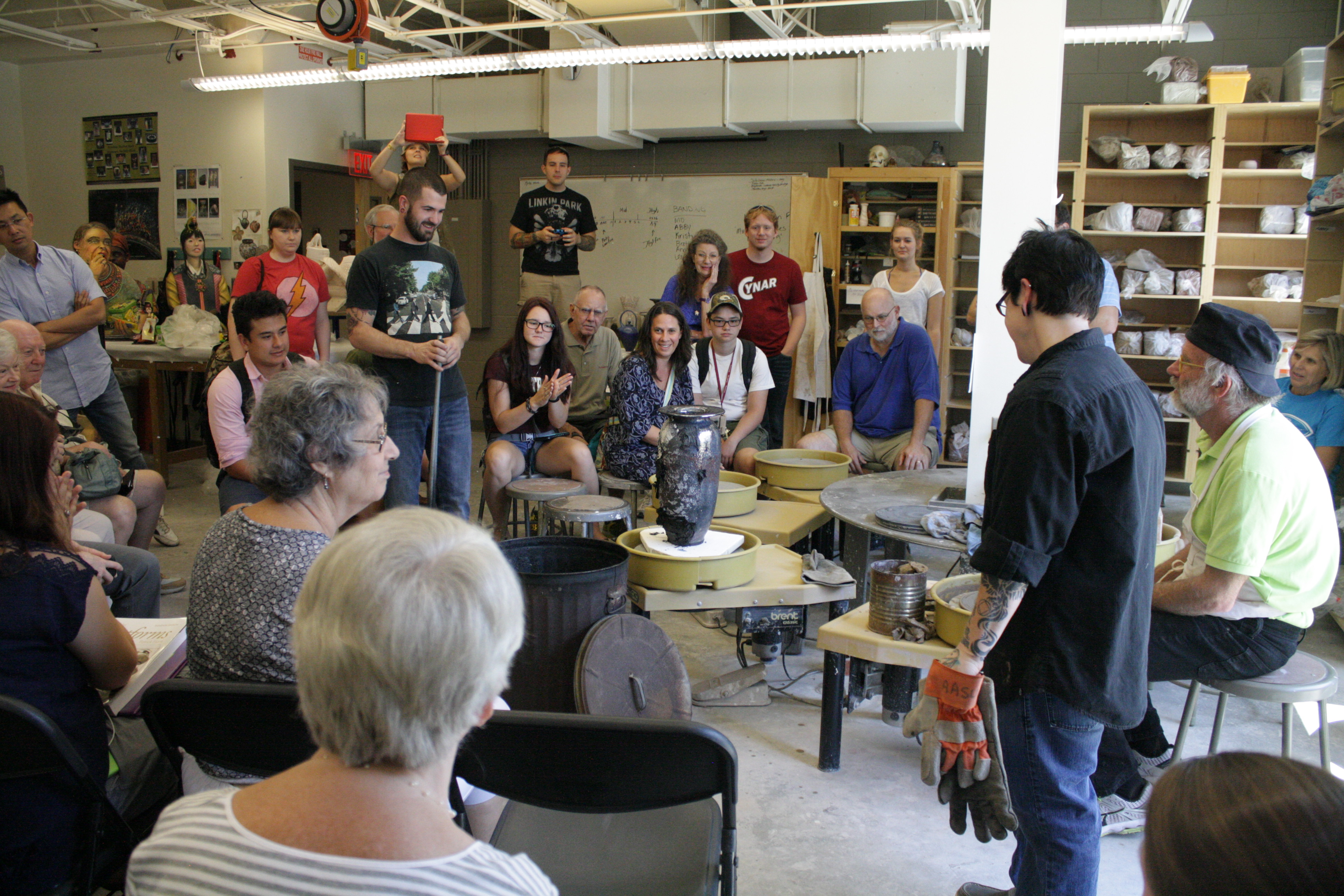 On Friday Aug 29 the first installment of the Robert I Strozier lecture series took place in what many would think to be a secret location — the ceramics studio. This treasure trove of creativity is next to the campus police station in the back of Annex II.

Christy Schaller, Armstrong’s ceramics lab assistant, was pleased with how the event went, especially the attendance: “I think we had a good turnout overall. I know there were a few empty seats, but people were still standing. I am glad they found it [the ceramics studio] because most students don’t know.”

The event began with a brief introduction to award-winning ceramics professor, Mr. John Jensen. However, Jensen was a bit concerned about being the first speaker of the lecture series: “I am a little excited and nervous. I like to give presentations on my work though, so I am anticipating enjoying doing it. What makes me nervous is the fact that I actually cracked a bone in my hip 3 weeks ago while biking, and I am on crutches and still in a little pain. So that makes the presentation more difficult.” Jensen, with thirty years of experience in pottery, was able to muscle up and give a wonderful overview of the art of ceramics and sculpture making.

Jensen began by explaining that all pieces begin as water based clay and are crafted into masterpieces of beauty by using many tools. The Armstrong ceramics program focuses on perfecting the necessary technical skills to eventually create art that stands out from the crowd of student work. In fact, Jensen described his personal style as tradition-oriented, but a little funky.

The professor exhibited some of his own pieces to further define his style. One by one, clear bags were removed to unveil original pieces of art, such as a colorful bowl comprised of melted stain glass, a pot constructed of spare buttons, and a life-size piece that comments on the obesity epidemic.

Josh Harris, an ASU student, found a favorite among the many beautiful pieces in a bust of a South Korean woman with a frog on her head “because of the story behind it.” The muse for this sculpture was actually a student who came to lectures during Jensen’s two weeks in South Korea. Harris likes “portrait sculptures because of the difficulty of getting the likeness of the person.”

Intrigued attendees followed Jensen out to the adjacent kiln yard to watch two assistants demonstrate raku firing. This process involves removing a piece of unfinished pottery from a kiln at temperatures reaching nearly two-thousand degrees and placing it in a metal bin filled with newspaper. One assistant nearly caught on fire as the glaze of the vase stuck to her gloves. Bystanders could not catch their breath before the air was filled with smoke and floating charred newspaper clippings.

While the work of art was cooling in an oxygen decreasing bin and becoming what would later be revealed as a beautifully distressed silicon turned glass vase, attendees were shown the steps of throwing a pot.

Jensen sat at the potter’s wheel and explained the importance of getting the clay in the middle of the workable space. Unfortunately, he was the furthest off target he had ever been. The expert managed to overcome yet more obstacles by pushing back on the temperamental clay. The professor stressed the mental and physical strength needed to skillfully craft a block of clay into a smooth vase.

Overall, those in attendance seemed to enjoy becoming further immersed in the arts. Two audience members, including Interim Dean of Liberal Arts David Wheeler, were especially happy as they were chosen via raffle to take home handcrafted pots.