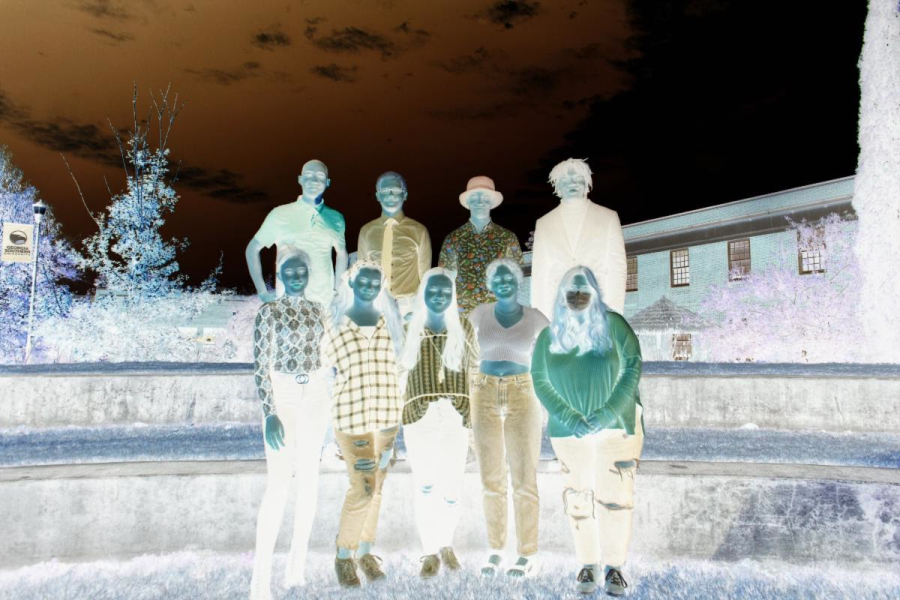 For the most part, the staff writers and editors of the Inkwell at Armstrong seem just like everybody else.

However, an insider scoop this week revealed that the members of the Inkwell have some pretty unique and scandalous secret lives.

The most jarring? Duncan Sligh, co-editor of the paper, isn’t an actual Georgia Southern University student.

Sligh reportedly only took the position as part of an agreement with an unnamed professor at the university.

In the agreement, Sligh would earn a “degree” in exchange for a redesign of the Inkwell.

An anonymous source reported seeing Sligh trade professors a print copy of the Inkwell for a fake Communication Arts transcript and folio account.

Terrell Jackson Jr., a staff writer at the Inkwell, says he felt betrayed once he heard the news.

“He would always talk about his graduation plans. I just can’t believe he would lie to all of us like this.”

Sligh refused to comment on the matter and has not been seen on campus since Wednesday.

Upon the discovery of Sligh’s actual intentions with the Inkwell, staff writer Ainslie Smith decided to go public with her secret hate account about him.

“I know it might not have been the best way to share my feelings, but now that I know what kind of person he really is I don’t really feel bad about the account.”

Jabari Gibbs, co-editor of the paper, also has some secrets he hasn’t shared with the student body.

Staff writers have shared that Gibbs is actually bald and that the hair you see him flaunting around campus is actually made from the follicles of past and current staff writers.

Gibbs shared that he drew inspiration from his favorite Disney character, Mother Gothel.

“From the first time I watched Tangled, I just knew I had to do anything to be like Mother Gothel. I just love her character.”

On a positive note, Gibbs shared that he does not take the hair follicles directly from the writers, but instead collects the hair leftover from their chairs when they leave the office.

“I’m not an animal. I wanted to be very considerate of my methods of collection.”

On Wednesday, many of the staff writers and editors brought personal decorations to the office to liven up their work space. One editor, Emmie Roper, brought many pictures of her and her supposed boyfriend who we later discovered was a paid actor.

“I’ve never seen her with him and the only pictures she shows us are taken in a dark room. I wasn’t surprised to find out that those pictures were all photoshopped,” an anonymous staff member said.

Amir Alexander, another editor of the paper, was one of the members who brought decorations to liven up his space. One of his decorations was a full size calendar which seemed pretty typical, but after further research staff members uncovered that Alexander has this calendar to keep track of which sweater he wears on a certain day.

“It was really weird. It would say “Sweater 134” on one day and then “Sweater 135” the following day. We looked through the entire calendar and we found out that he has one sweater for every day of the year. Even during the summer,” staff members said.

“I never repeat sweaters. I have to give the people what they want to see,” Alexander commented.

You may recognize this next name from his Faces of Armstrong section of the Inkwell but Terrell Jackson Jr. isn’t just another face of Armstrong. He’s actually a cyborg.

“I tried on his glasses once and all I couldn’t see anything through them. Just encoded messages about all of us,” a staff member reported.

“I feel much better knowing that I can walk around in my true form now,” Jackson Jr. said.

All of this goes to show that in some way or another, we all have a secret life. Maybe now is the time to embrace it.

Editor’s Note: This article is satirical. Or is it?