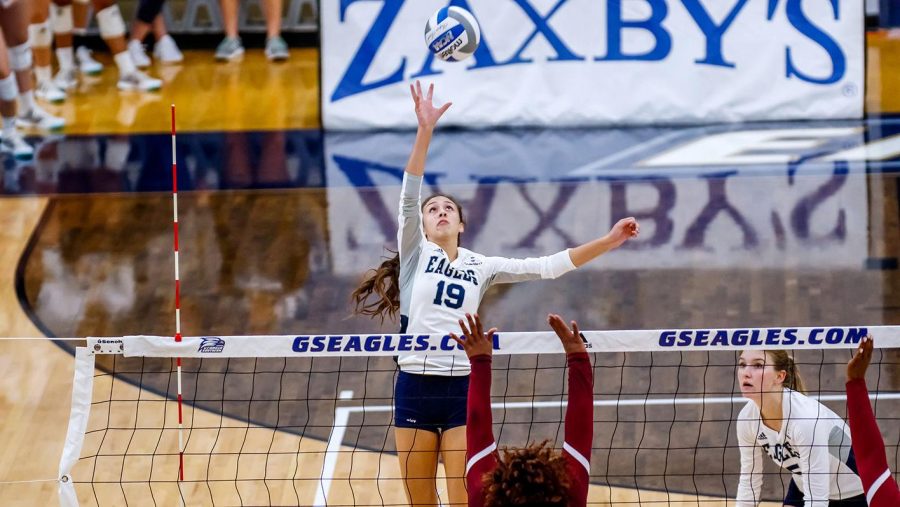 The Eagles fell 0-3 on the season after dropping all three matches in the West Virginia Invitational.

Georgia Southern volleyball fell unsuccessful at the West Virginia Invitational over the weekend as they lost all three matches they played.

They first faced off against host West Virginia where they lost 1-3. The Eagles dropped the first two games to West Virginia, but sealed a close win in game three 25-20. It wasn’t enough though, as WVU sealed the match victory, taking the fourth game over GS 25-18.

Later in the day the Eagles looked to take their first win against Wright State but fell short again losing 2-3. The match was close and went to five sets where the Raiders took the win 15-8 in the final set.

Senior Lauren Reichard was the leader for the day with 15 kills and 12 blocks in two matches, while Junior Carly Turner followed behind with 16 kills and seven blocks.

“We were up and down day today,” head coach Dustin Wood said to gseagles. “There were some positive things and things we obviously need to work on.”

The Eagles closed out the weekend with another close loss to UCONN. The match went to five sets again, and UCONN won by only two points in the final set.

Reichard was, again, a game leader as she racked up 11 kills, five blocks, and has a .364 hitting percentage.

“We learned a lot about ourselves this weekend,” Wood said to gseagles. “I know 0-3 doesn’t look good on paper, but we won by learning our identity. We are getting better by playing a tough non-conference schedule, which will help us going into conference play.”

The Eagles will be back in action at Minnesota August 31-Sept. 1 in the Diet Coke Classic.