How I’ve Lived in The Compass Point Complex 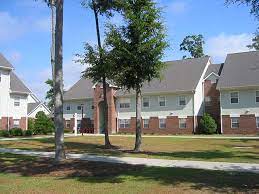 I’ve lived on the Georgia Southern Armstrong campus this year. specifically in the Compass Point Complex. Admittedly I was excited to be able to live in an apartment-style dorm, and I said to myself, “Wow, this is an upgrade over my freshman dormitory.”

This belief completely receded once I stepped foot into the space in August. I was welcomed to a putrid odor in every part of the dorm, and my family was livid that I would get placed in a dorm that smelled like it did.

Black mold persisted throughout the dorm, especially in the bathtub, toilet, refrigerator and bug-infested living spaces. My stove was unusable beyond 30 minutes of cooking, and my dishwasher never worked. In addition, my bathtub got clogged four times this year and all the sinks in the dorm were stopped up at least once.

The common laundry area has insects every time I enter and the floors always need cleaning. Even walking outside of my dorm, the common exterior areas are always filthy, polluted with cigarette buds, and at one point it took over three weeks for there to be a deep clean done on the stairs in my building that had vomit on them.

Nonetheless, it took an entire day for me to clean the dorm once I moved in. It was still subpar despite my efforts; I had to invest in a variety of bug-killing pesticides because of the multiple different bugs existing in my dorm.

You may ask why I wouldn’t request a room change, which was an idea, but after visiting a couple of my friend’s dorms in the first week, I realized that my room was not an exception.

Everyone’s dorm that I saw on campus had black mold throughout their house and a revolting smell that would take an entire can of air freshener to diminish. Not everyone had a bug problem, but the black mold and the smell were things I saw uniformly amongst on-campus housing.

I eventually was able to make the conditions better after strenuous effort, but the age of the dorm was something that was out of my control. I sometimes would say, “Compass Point seems to not have been refurbished since it was built.” This brings me to the point that I can say that I cannot find any record of the complex ever going through any reconstruction.

I truly was excited for Compass Point because my freshman year in Windward Commons was decent; I did not have many complaints, if any, regarding the condition of the dorm. My issue lay within the ridiculous policies that were in place.

I felt that students were held to extreme standards. Anything and everything would warrant a penalty from housing. Students are not allowed to have rope lighting, large banners and even air fryers. I honestly cannot understand why students cannot have items such as the three listed. I myself had to invest in an air fryer due to the condition of my stove and my fear of triggering the smoke detector, which goes off after 30 minutes of cooking.

It’s simple. Georgia Southern has to do better with Armstrong Housing; $3500 for a school year of poor living conditions is akin to a scam. There is no reason that I should have had to dispatch the facility services over ten times to come and fix things in my dorm.

I shouldn’t be afraid to walk in the middle of my living room and hope that I don’t fall through due to the weak tiles that creak every time someone walks on it. As residents of these spaces, we get held to the utmost standards, which makes me ask why our quality of living is so inadequate.