What Do Armstrong Students Think About On-Campus Living?

As an Armstrong student, I need to stay aware of all things happening on campus. I like to know when there are events to maintain a social life. I try to keep a detailed schedule so I know when my work is due for each class (and how long I have to procrastinate for each assignment).

It’s also good to know what the Galley is serving, so I can escape my at-home fortress of ramen noodles. Finally, I like to know how my peers are doing, especially when it’s about how they are living.

The Inkwell asked many of you a series of questions regarding your living arrangements and the quality of on-campus housing.

Is on-campus housing truly worth it? This is the question that we set out to answer.

We set out to ask you all the following: ‘How satisfied are you with campus housing?’, ‘How often do you have problems with utilities?’ and ‘How efficient is campus housing fixing maintenance problems in the dorms?’ The results are shown here in Figure 1: 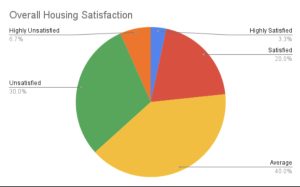 As you can see from the pie charts above, only 20% of the respondents stated that they were satisfied with on-campus housing. An even smaller minority indicated being highly satisfied with Armstrong’s housing.

The indicator, ‘average,’ took the most votes with a value of 40%, while the other 36.7% of survey takers indicated that they were either unsatisfied or highly unsatisfied with Armstrong’s housing.

The pie chart titled ‘frequency of utility issues’ shows a 50-50 indication between those who experience issues with on-campus utilities and those who do not. 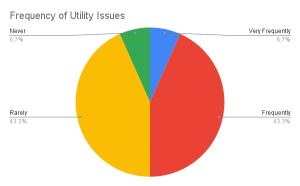 Collectively, this data indicates that on-campus housing is relatively average.

If so many students live so close, why aren’t they just staying on campus? When we asked, ‘why don’t you live on campus?’