The George-Anne Media Group • May 2, 2018 • https://thegeorgeanne.com/3748/news/governor-deal-to-sign-hands-free-driving-bill-into-law-in-statesboro/ 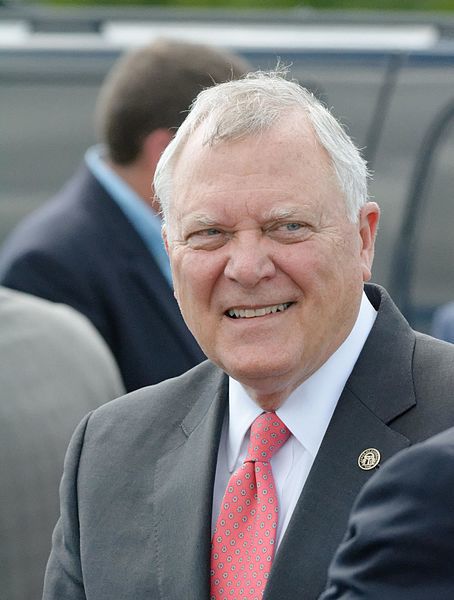 Georgia Governor Nathan Deal will be visiting Statesboro to sign major legislation into law including a hands free driving bill. The new law will prohibit the use of hand held electronic devices while driving.

Georgia Governor Nathan Deal will be visiting Statesboro on Wednesday to sign a series of legislation including the Hands-Free Georgia Act.

The signing of the bill will be held at the Statesboro-Bulloch County Airport at 1:45 p.m., Leigh Price, executive associate to the Georgia Southern University president, said in an email.

According to a press release by the Georgia House of Representatives, drivers would not be allowed to physically hold or support any wireless telecommunications device or a stand-alone electronic device, such as an iPad, iPod, Kindle, etc., with any part of the body, while operating a vehicle.

Exceptions would be made for:

Drivers would not be allowed to record or broadcast a video on a wireless telecommunications device or stand-alone electronic device.

Exceptions to this would be for the sole purpose of continuously recording or broadcasting video within or outside of the motor vehicle with dash cams.

Fees for violating the “Hands-Free Georgia Act” are as follows:

According to the bill, first offense fees can be waived by appearing before the court and producing a device or proof of purchase of the device that would allow the driver to comply with the law in the future.

Further exceptions to the act include:

While reporting a traffic accident, medical emergency, fire, an actual or potential criminal or delinquent act, or road condition which causes an immediate and serious traffic or safety hazard.By an employee or contractor of a utility services provider acting within the scope of his or her employment while responding to a utility emergency.By a law enforcement officer, firefighter, emergency medical services personnel, ambulance driver, or other similarly employed public safety first responder during the performance of his or her official duties.While in a motor vehicle which is lawfully parked.