The George-Anne Media Group • May 4, 2018 • https://thegeorgeanne.com/3752/sports/eagles-head-to-atlanta-to-close-out-regular-season/

Eagles head to Atlanta to close out regular season 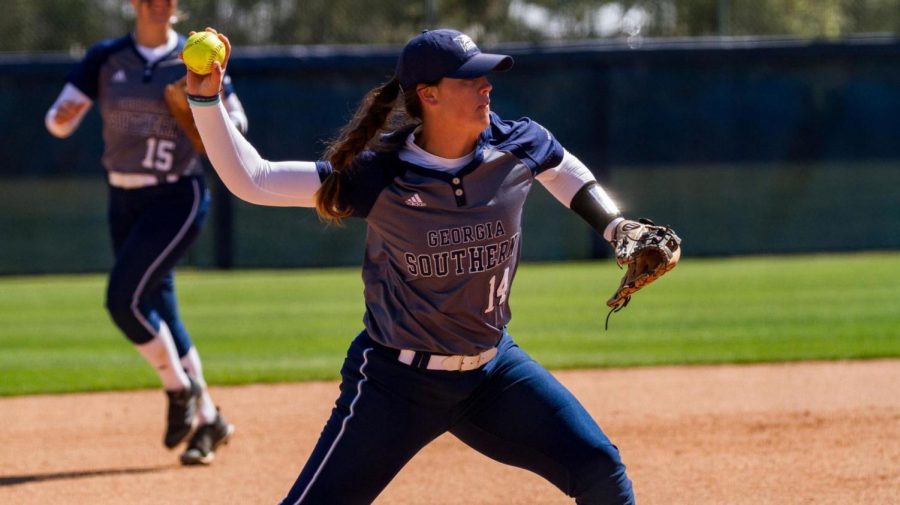 Junior Hannah Farrell is fifth in the Sun Belt with 10 doubles.

The Eagles were victorious last week by sweeping rival Appalachian State and look to do the same to rival Georgia State.

As a team GSU bats a .289 average and has totaled 239 runs and 397 hits for the season. Leading the Panthers and looking to be a major threat with 40 runs, 61 hits, and 18 homeruns is Ivie Drake who bats an average of .427. Trailing behind Drake with a .319 batting average is Skylar Mosel who has notched 19 runs and 36 hits for the season.

The Eagles have now had a winning season so far thanks to a successful weekend against App State and are now on a winning streak of three.

GS collectively has improved to a .272 batting average and has logged 204 runs and 367 hits for the season. Leading the Eagles batting a .331 is Hannah Farrell who has notched 24 runs and 50 hits along with eight homeruns for the season. Following behind Farrell with 22 runs and 44 hits is Mekhia Freeman who bats an average .319.

The series will be played at Georgia State starting with game one on Friday May 4 at 6 p.m., following with a double header on Saturday May 5, with game two starting at 1 p.m. and game two beginning at 3 p.m.