The George-Anne Media Group • May 18, 2018 • https://thegeorgeanne.com/3754/sports/eagles-use-rain-delay-to-advantage-with-19-run-blowout-of-georgia-state/ 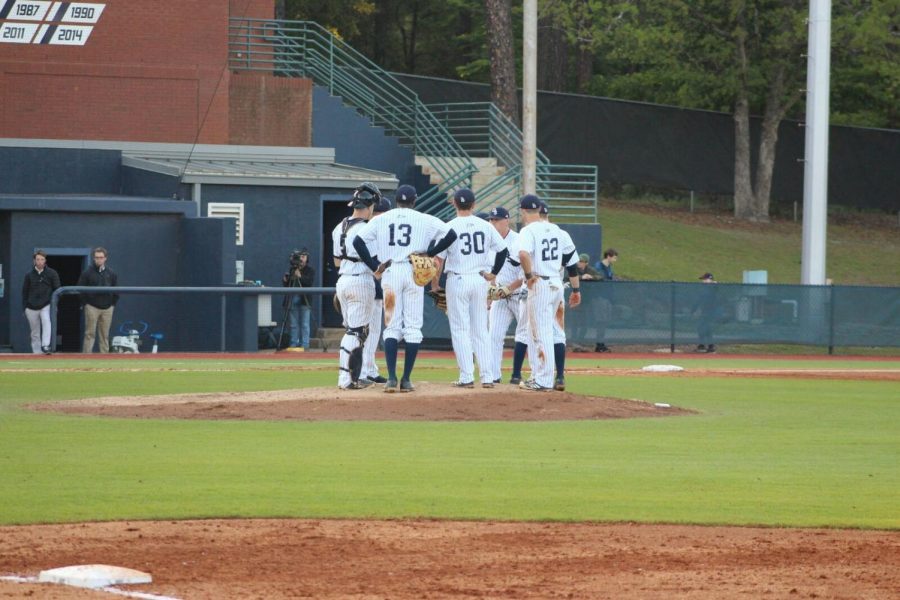 Thursday night, after nearly an hour thunderstorm delay, the Eagles prevailed over the Panthers 19-5, taking the win for game one in the last regular season series for Georgia Southern.

The Eagles were first on the board due to a solo home run hit in the bottom of the first by sophomore Mitchell Golden, giving them a 1-0 lead over the Panthers. GS continued to impress with freshman Christian Avant adding another run in the second inning- making their lead 2-0.

The fourth inning proved to be a big one for the Eagles as Avant was on fire as he notched another run and freshman Jason Swan hit his first career home run for the Eagles, adding two more home runs to their lead over the Panthers.

GS continued to stay hot on the bats as sophomore Steven Curry hit a three-run double RBI in the bottom of the fifth, all while the Panthers were still unable to put points up on the board.

The Panthers were finally able to respond in the top of the sixth with a two-run home run and two additional runs off a bases-loaded walks to make the score 8-4. Along with the Panthers’ addition in the top of the sixth, GS also saw their second and third pitching change of the game. Braxton Johns came in for Chase Cohen after Cohen had given up six hits to GSU and Whitney came in to relieve Johns.

The Eagles answered to the Panthers scoring by having a big sixth inning as well- putting up five more runs to add to their lead. Home runs were common in this inning as sophomore Mason McWhorter hit a two-run homer and Avant, staying hot on the bats, hit a solo homer.

GS scoring continued after that with two more runs in the seventh and four more on top of that in the eighth. GSU was only able to answer with one more run in the eighth off a solo home run.

Chase Cohen took the win for the Eagles as he pitched six runs and three hits in the 2.2 innings he played. Like GSU, the Eagles also had five pitching changes throughout the game.