The George-Anne Media Group • May 9, 2018 • https://thegeorgeanne.com/3775/sports/jaguars-best-eagles-for-a-disappointing-end-to-a-hopeful-season/

Jaguars best Eagles for a disappointing end to a hopeful season 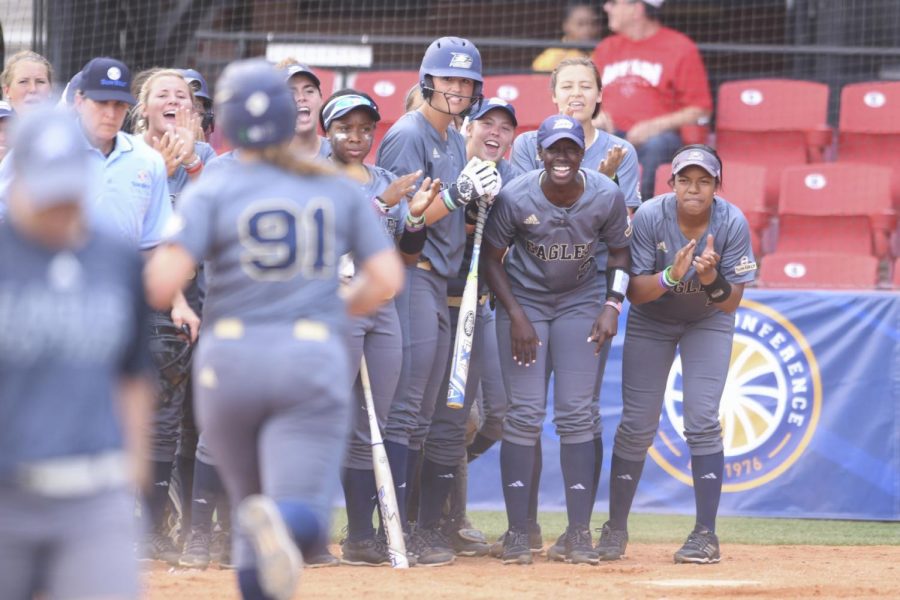 The Georgia Southern softball team finished with a 16-10 non-conference record and will return many key players for next season.

The Eagles fell unsuccessful against their first matchup in the Sunbelt championship to South Alabama. The Jaguars were able to take the game by just one run, winning 3-2.

The Jaguars were the first on the board in the first inning off of a single RBI to centerfield. The Eagles were able to answer in the third inning as Mekhia Freeman doubled to right center, allowing Alesha Mann to make it to home plate.

The game remained tied 1-1 until USA was able to break the stalemate and put up two runs in the fifth as they were able to get two runners to the home plate off of a sacrifice pop fly in one play and off a single to center field in another.

GS was able to put up one more run in the six as Alyssaah Mullis has a solo home run to left field but that capped the scoring for the Eagles and put an end to their season as USA took the victory 3-2 and will move on in the tournament.

While senior pitcher Kierra Camp took the loss for the Eagles, she pitched a great game as the senior threw only three hits and two runs in the five innings she was on the mound, as well as five strikeouts.

Devin Brown took the win for the Jaguars as she pitched all seven innings and only allowed four hits and two runs along with four strikeouts.

By the end of the season the Eagles were batting a .272 average as a team with Mekhia Freeman leading with a .331 batting average. GS also logged 215 runs and 396 hits for the season as Hannah Farrell contributed big time with 25 runs, 54 hits, and nine home runs.

Pitching wise the Eagles saw a very successful season. Senior Kierra Camp was a standout as she had a 4.12 ERA and only pitched 144 hits and 79 runs in the 148.2 innings she pitched along with 69 strikeouts.

Freshman Rylee Waldrep also left quite the impression with her 5.06 ERA along with pitching only 145 hits and 91 runs in the 122.2 innings she played, giving fans much to look forward to in the upcoming season.