The George-Anne Media Group • May 12, 2018 • https://thegeorgeanne.com/3782/news/georgia-southern-students-receive-four-emmy-nominations/ 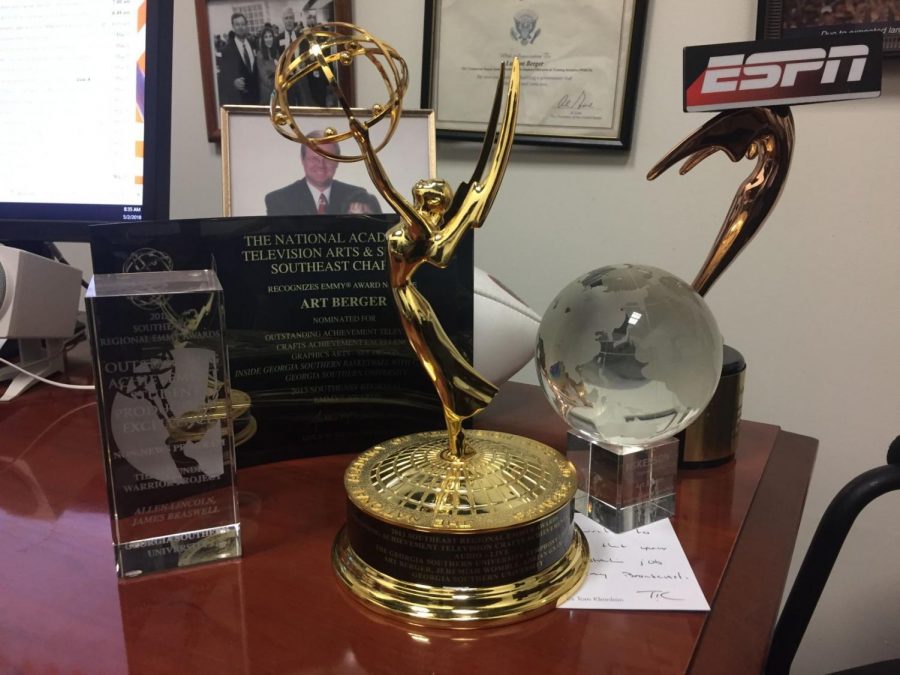 This year's four Emmy nominations are not the first for the GS MDC. A 2013 Southeast Regional Emmy sits on Art Berger's desk.

Holden Galatas, senior public relations major, received a nomination in the Talent category for his anchor work of these events.

“I’m so excited to have received this honor, I never really thought this would be occurring in this stage of my career. This has been a team effort since we started. If I win this, it is a trophy for the team not just for me,” Galatas said.

Head, senior art major, said she is excited and honored to receive the nomination.

Holder, a junior electrical engineering major, said he joined the MDC this past year and is grateful to the opportunities the MDC provides.

“The experience working at the MDC has provided me with an unsurpassed professional experience in the broadcast and video production field,” Holder said. “I have been presented with numerous opportunities to grow and really augment my major of Electrical Engineering with this educational experience. I can’t thank Georgia Southern enough for this opportunity.”

Recent graduate Jayden Moss also received a nomination in the same category and has been hired after graduation by Disney Theme Parks to create commercials and help in designing new movie themed rides for the park as well as lighting and audio for shows.

“This organization has provided me opportunities to work with big companies like ESPN, get live broadcasting experience,” Moss said. “It’s good to be able to add to the resume because that’s something I can’t get in my major as far as hands on experience and what it’s like to actually do a live shoot really fast and television worthy for those viewing around the world.”

The MDC is a division of University Advancement and External Affairs. The organization provides students with training and on-hands experience that they can then translate into real-world opportunities.

“Our number one mission is to support the university,” Berger said. “We support academic units and we support athletics. We build videos for academic units. We film lectures or guest speakers. Our primary emphasis is live video.”

While the GS MDC has been nominated in the past for Emmy awards, Berger said this is the first year the MDC had this much student success.

“I think our students have worked really hard,”Berger said. “The level of technical expertise that they’ve achieved has been really good this year. They realize the value of working hard and they can better themselves and the university.”

The student Emmy winners will be announced in Atlanta on June 9. To view video created by the GS MDC, click here.