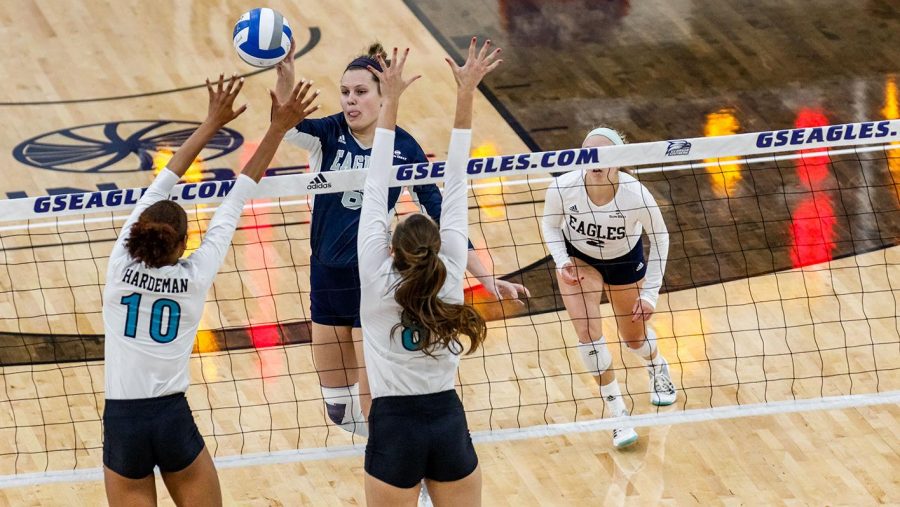 With seven seconds on the clock on a Saturday night in early January, the fans in a packed Hanner Fieldhouse held their breath as a tight game was coming to an end.

But with the ball in the 5’11” junior point guard’s hands, the fans, coaches and players had no reason to worry.

He threw the ball up and a swish sent everyone in Hanner into a celebratory frenzy.

“I knew it was going in,” Tookie Brown said.

From High school to College

In January 2014, as a high school junior at Morgan County High School, Brown committed to SEC school Mississippi State and later signed a National Letter of intent that November.

The guard continued to shine his senior year earning the GHSA 3-A Player of the Year. Then on April 7, 2015, Brown decommitted from the Bulldogs and reopened his recruitment.

Georgia Southern was one of the only schools that continued to pursue Tookie. Head coach Mark Byington and the rest of the coaching staff were one of the main reasons why Brown committed to GS.

“[Byington] and the coaching staff stuck with me when I decommitted from Mississippi State by always calling me and talking to me,” Brown said.

Later on in 2015, Tookie put up 20 points in Cameron Indoor against the number 7 Duke Blue Devils in his fifth true road game as an Eagle.

Scoring 20 points became the norm for Brown, who has gone on to embody the role of being the best player for the Eagles the past two years.

After having such a great sophomore season, it wasn’t easy to have another fantastic season Byington said. The team still had expectations for Brown’s junior year.

“We wanted him to come out and compete and he improved which wasn’t easy to do,” Byington said.

For Tookie, this season was about improving, having fun and winning games. And the junior did all three.

“Once you win on the road, the bus ride or plane ride home [is] sweet,” Brown said. “I think my favorite moment was just getting the win and having fun with the guys.”

There were a lot of wins to choose from this season from the season opener win over ACC school Wake Forest to the last second buzzer beater over Little Rock to the incredible Georgia State win at home in front of a sold out Hanner Fieldhouse.

To no surprise, the State game was Tookie’s favorite especially after having to sit out the first game in Atlanta.

“It was good for me to see what they can do and what my team can do without me,” Brown said. “Once Georgia State got here, I was well locked in and mentally prepared.”

Even in games like the one against GSU, where teams would throw their best defender at Tookie sometimes even double teaming him, Brown was still able to lead the team in scoring and assists.

“If they double team me, I’m trying to find my teammates first,” Brown said. “We had shooters all over. I trust our guys. I try to get to my spot, so they can knock down their shots.”

Tookie’s trust and leadership was evident on the court, but more importantly off the court for Byington.

“He does what he’s supposed to do. He’s idolized by kids and does a great job handling that responsibility,” Byington said. “The challenge for me sometimes is how to get on him and motivate a guy that really does nothing wrong.”

These off-the-court intangibles combined with the talent when he’s on the court has earned Tookie Brown one of the 2017-2018 The George-Anne Student-Athlete of the Year awards.

Brown led the team in scoring with 18.9 points per game, in assists with 4.2 assists and earned his third first team All-Sun Belt honor.

“[Tookie] is one of the most competitive guys I’ve been around since I’ve been coaching,” Byington said. “His sense in the game of not being scared of big moments is one thing that is helpful for him.”

This season may have been the last season in the blue and white for Tookie Brown with him declaring for the draft back in March. If he has played his last game in Hanner Fieldhouse, Brown will miss the fans the most.

“They are everything to Georgia Southern,” Brown said. “They’re all just one big family.”