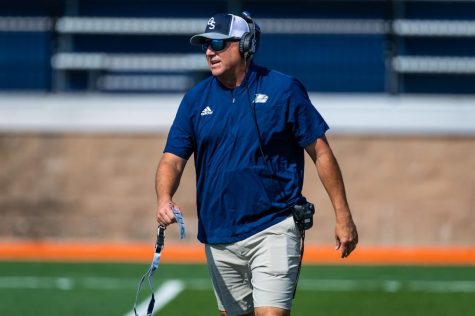 History: The Eagles and the Bears have never met on the gridiron.

The Off Season and What to Expect: Whew, what a whirlwind of a past year the Georgia Southern football program has experienced.

This time last year, Chad Lunsford was at the helm. This time around, former USC head coach Clay Helton will be leading the way for the Eagles.

Helton—along with an entirely new coaching staff outside of Kevin Whitley—will transition GS away from the triple option offense the program has run for decades. Helton said the team will throw the ball more, but will more than likely remain a “60-40” run-heavy offense.

Buffalo transfer quarterback Kyle Vantrease and Houston transfer wide receiver Jeremy Singleton will look to head the passing game, while Khaleb Hood and a plethora of other weapons will also look to make a difference. Redshirt junior running back Gerald Green is expected to carry the majority of the load in the backfield and has already been named to the Doak Walker Award watch list.

The defense remains mostly the same, aside from a few key departures. Will Harris’s unit returns a number of names throughout all levels of the defense and will also welcome back All-American cornerback Derrick Canteen Jr., who missed all of last season due to injury.

Conclusion: While the team welcomes a long list of new faces, the program should be surrounded with a sense of excitement and anticipation of what’s to come.

The offense will be the main thing to watch for on Saturday as the team undergoes an extreme transformation.