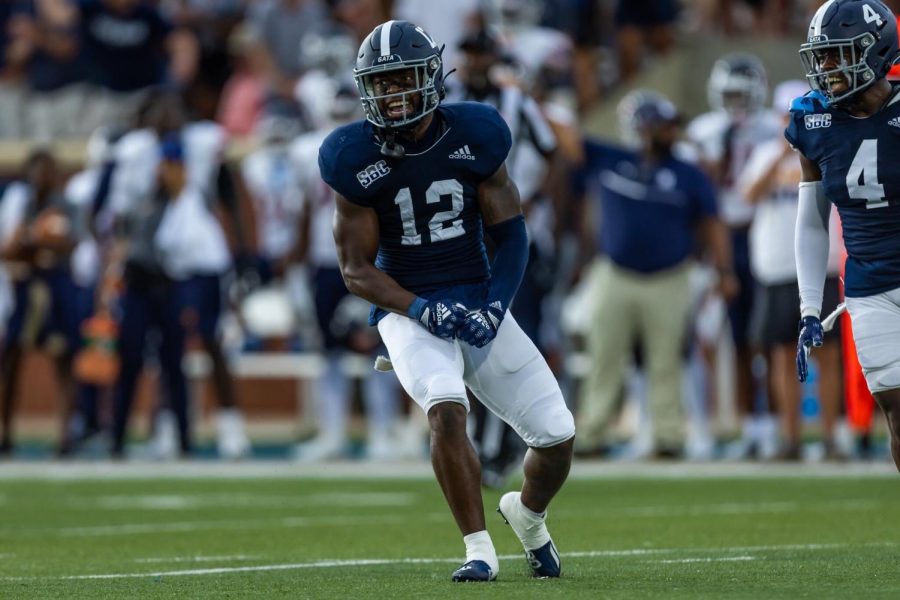 On Saturday, the Eagles took down Morgan State in a 59-7 rout to kickoff the Clay Helton era in Statesboro.

With the new staff and a long list of new faces, the game had its fair share of ups and downs and there are a lot of things to look into. Here are the three biggest takeaways from Saturday’s season-opening victory:

The running back situation still needs to be settled

The Georgia Southern running back room is talented, but transitioning from a run-heavy triple option offense has seemingly affected their production as the team struggled on the ground against the Bears.

O.J. Arnold, Gerald Green and Jalen White split the majority of carries, rushing for 45, 44 and 35 yards, respectively. However, none of the three seemed to separate themselves from the pack.

Against a Nebraska team that allowed more than 200 rushing yards to Northwestern in their season opener, the Eagle backs should be excited for a great opportunity to showcase their abilities.

The Eagles threw the ball a total of 46 times on Saturday, which is the third most attempts by a single quarterback in Georgia Southern history. 10 different Eagle receivers hauled in at least one pass, led by Sam Kenerson’s seven receptions and 99 yards.

The three-headed monster of Jeremy Singleton, Khaleb Hood and Kenerson should lead the way. However, sophomore Derwin Burgess Jr. is immensely talented and already found himself a spot on SportsCenter’s Top 10 Plays list over the weekend.

Even further down the depth chart, Darius Lewis is a slot receiver with a plethora of experience, Amare Jones is a fifth-year gadget-type receiver who can make plays and Marcus Sanders Jr. is another talented freshman. The passing game should not miss a beat with a receiving group this deep.

The Eagle defense of the past is… back?

Last season, the Eagles ranked No. 108 in total defense and allowed more than 440 yards per game. On Saturday, they held Morgan State to just 250 yards. The team nearly matched their total of five interceptions in 2021, picking off the Bears three times.

The return of All-American cornerback Derrick Canteen Jr. was undoubtedly a boost, but a number of Eagles outperformed expectations. Tyler Bride, Isaac Walker and Jalen Denton all forced a turnover in a dominant performance from the secondary.

Nebraska quarterback Casey Thompson threw two interceptions of his own against Northwestern, so there should be ample opportunity for the secondary to build on this week’s strong performance.