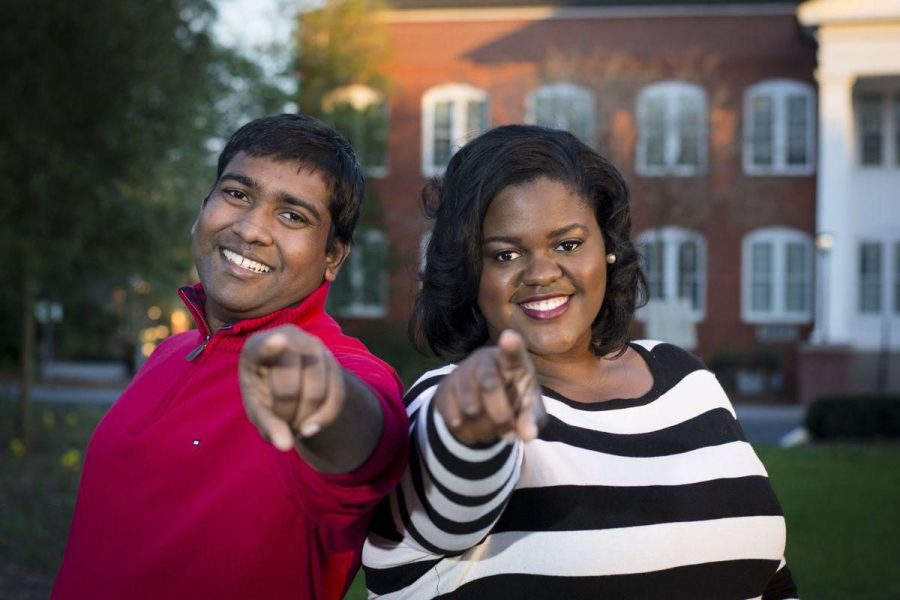 Dylan John and Valencia Warren, the president and executive vice president respectively for the Student Government Association at Georgia Southern University, will complete their graduate studies in the spring and summer this year.

The John-Warren ticket will come to a close at the end of the spring semester, making way for the 2018-2019 president and executive vice president, Jarvis Steele and Amber Monkou.

“The John-Warren administration did a lot for our University. The changes that they made will be felt for many years to come, and the people that they helped are countless,” Steele said in an email.

“[John] is one of the strongest student advocates I have ever met in all of my years in higher education, including my years as a student,” GS President Jaimie Hebert said. “He is a true servant leader in the very truest sense. Dylan comes into these meetings [with me] with an agenda that represents the students, not him, and it’s very clear that he is an advocate for the opinions and desires for the entire student body. He’s one of the finest examples of a servant leader that I’ve ever seen.”

Before John and Warren joined together to run as president and executive vice president, Warren said she ran on a different ticket altogether—until she was removed from the ticket, allegedly due to her race.

“I was actually kicked off the ticket because we were told that two minority students, specifically two black students, couldn’t win,” Warren said. “It was the craziest experience of my life. I was shocked… That fueled me more to pursue the diversity and inclusion component of it, but also to run with a candidate who wasn’t afraid to challenge what Georgia Southern was used to.”

Warren said she was originally planning to run as a presidential candidate, but because her goals were related mostly to internal issues, like diversity and inclusion within SGA, she decided to run as executive vice president.

Warren, a senior logistics major at the time, believed if she could fix the internal structure, she could change how the SGA impacted the school.

Thus, Warren needed a president. She asked John, then a senior construction management major, to join her ticket. At the time, John was participating in 19 student organizations, holding officer positions in 12 of them. He took a few weeks before he agreed to run as president alongside Warren.

John and Warren both describe themselves as underdogs in the 2016 election.

“As underdogs, we had to rethink things,” John said. “How do we cross this line saying that two minority students may not be able to secure a win? How do you process that?”

John said he and Warren had the backing of hundreds of students during their campaign, including student organizations. He said the student support was an emotionally powerful experience.

“What we ended up doing was… marketing was handled by the American Marketing Association of Georgia Southern, so we had an entire student organization backing us. Clips for all our commercials were filmed by the Film Club at Georgia Southern.”

Ultimately, John and Warren won the election with 957 votes.

John described the feeling of winning the election as “unreal.” He said he had mentally prepared to lose the night before.

“I did,” Warren said, laughing.

When John and Warren returned to GS for the 2016 fall semester to attend graduate school, they began their tenure as SGA president and executive vice president.

“We created this powerhouse ticket, even as the underdogs, and I wouldn’t change a thing from any of those experiences, because that rejection [from the other ticket]—it was more of a delay, not a denial,” Warren said.

During the John-Warren administration, SGA began facilitating individual projects for Senators, which increased SGA’s projects from five or six per year to 35 to 40, John said.

“Typically, the president and vice president would essentially have a conversation to decide what the year’s administrative goals are… I remember talking to an administrator at my first one-on-one… and they told me, ‘Dylan, you need to decide on one or two big areas you’re going to focus on.’ I said, ‘Why can’t I focus on them all?’” John said.

Within SGA, Warren said an accomplishment was improving training for members of the organization. She said that training, along with hands-on experience through individual senator projects, led to a competitive 2017 election.

“It’s been really great to see them blossom from their beginning stages of barely talking or barely wanting to make motions to now, you can’t silence them in a Senate meeting or when we’re talking about really important organizational documents,” Warren said.

Warren also named a 2017 diversity resolution she proposed as one of her accomplishments in SGA. The proposal, which contained ten major clauses and suggestions to GS on how to better handle underrepresentation of minority groups on campus, passed the student senate unanimously.

Finally, among other accomplishments, John praised SGA’s proposal, originally suggested by the Active Minds student organization, that resulted in sexual assault hotline and suicide hotlines being printed on the back of Eagle ID cards, as well as SGA Vision 20/20, a survey in which students on several campuses ranked their concerns.

Difficulties on the job came to John and Warren in the form of late-night phone calls and learning different facets of management.

“In the public face, you see us as two who are on the same page,” John said. “But if only Georgia Southern University knew how many hours of phone calls of disagreements, to come up with a consolidation of what our administration stands on, you’d be surprised. There would be so many hours.”

Warren said she is a detailed and organized person. She said she initially had difficulty delegating tasks to other members of SGA, but there was too much work for one person to complete.

John, meanwhile, had more difficulty providing emotional support to others.

“There’s nobody who can delegate faster than Dylan John,” John said. “…I think I’ve been able to consult with Valencia in terms with the emotion-related stuff, and I think even in the SGA office they know if you are expecting an emotional-support response, don’t go to Dylan. Go to Valencia.”

Recently, the SGA organizations on the GS and Armstrong State University campuses joined to form a consolidated SGA.

“I would actually venture to say that we’ve had the most seamless consolidation of Student Governments in the State of Georgia,” John said.

“What they have done has been a critical aspect of the success of this consolidation. I’ve said it before, that the first group of people to get it, to come together in unity in this consolidation, were the students,” Hebert said. “And that doesn’t always happen first. The students aren’t always the first ones to come together. That was really a result of student leadership on our campuses.”

Ambanpola and John are both from Sri Lanka, where they attended competing high schools. John said their connection formed a foundation of trust between them as they worked to consolidate their organizations.

Life outside the SGA office

When asked what they do when they are not working, John and Warren laughed.

“We don’t have lives,” Warren said.

“You want to know the honest answer? I could tell you that I go to the movies with friends, and that I go bowling, but I sleep … If I can squeeze a nap in for an hour after an all-nighter, it’s great,” Warren said.

John said that he loves movies, and before he purchased a MoviePass subscription, he accumulated 100,000 points at the local AMC theater. However, he said, it has been difficult to do anything fun, and he is thankful for time he can spend with his family, friends and girlfriend.

“A lot of people in the office can attest to it—last year as an SGA president, I probably looked a lot more stressed than I am this year,” John said. “This year, I think I am a lot less stressed because of my girlfriend. At least I have someone to remind me that I have to have a life outside of SGA. I’ll be having a shower in the morning and deciding what some SGA structures need to look like.”

Warren said it is important to have people who can occasionally pull them away from SGA.

“You get to the point where it’s starting to consume you, and you’re worried about every single facet of SGA. You dream SGA. You eat, and you’re like, ‘Dang, I wonder what we have on the menu for the SGA banquet,’” Warren said. “To have someone who can pull you back into reality … is really essential.”

What’s next for Dylan John and Valencia Warren?

“I’m taking a break after graduation. I’m probably going to take a three-month sabbatical, if you will, [to] really figure out what’s next in life,” Warren said.

Warren said that after years of working, earning multiple degrees and being involved on campus, she wants to take some time to be present in the moment while deciding her next steps.

“I should probably say, I’m not going to be a bum,” Warren said with a laugh.

Though Warren hopes to move to either Washington, D.C. or Denton, Texas to work for the Federal Emergency Management Agency (FEMA), she is also launching her own business in May: a wedding planning company called “Exemplary Designs by Valencia.”

Meanwhile, John will face a period of adjustment before he begins working in the fall.

“[My next step] has a huge banner across it. It’s called going from hero to zero,” John said. “I’m going to transition from being SGA president of an institution with 27,000 students to now going into industry.”

John said he hopes to join a construction company in either Georgia, Washington, D.C., or Texas. Although he will no longer be a student leader at GS, he said he wants to help student leaders make the transition into the post-graduation world.

“[John and Warren] were fantastic forces of change and dedicated civil servants that were successful in making sure our University was afforded opportunities that it needed and asked for,” Steele said in an email. “All in all, they did a great job, and it doesn’t get much more ‘true blue’ than those two. I am sure they will both be wildly successful in the next part of their lives and will miss both of them dearly.”

As John and Warren prepare to graduate from GS, they want to leave students with the following messages.

“I want the Georgia Southern community to realize that Student Government leaders, as much as they’re leaders in our community, that they’re people too. And I want [people to know] two things: student initiative is powerful, and accountability is powerful,” John said. “And I would really, really hope that students hold student government accountable, and also share initiatives and be willing to take initiative.”

Warren wants to encourage students to speak up for what they believe in, even if they feel like they are the only people who care about a certain issue.

“We are unempowered to do anything unless the students speak it, because they have that much power in their voice, so speak up, speak out, speak loud and don’t let anyone silence your voice,” Warren said.

Warren said, “I’ll miss you guys, but the fight will not stop.”