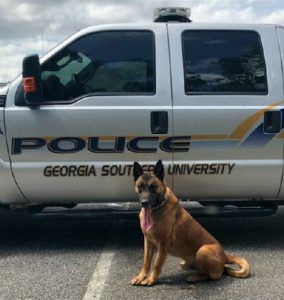 Bear is the second K-9 officer trained by UPD and the first to be assigned to the Armstrong campus.

The Georgia Southern University Police Department is training a new K-9 officer in explosives detection for the Armstrong Campus.

The new officer, named Bear, is a Belgium Malinois and will be the first K-9 unit assigned to the Armstrong campus.

Bear is the second K-9 officer to be added to the UPD. The first being Deimos, who is currently assigned to the Statesboro Campus.

Bear was obtained through a partnership with the Chatham County Sheriff’s Office and has worked as an explosive detection overseas for the Department of Defense.

Bear has been training with UPD Patrol Officer Phillip Garza and the two will work together at the Armstrong campus. Before going to Armstrong campus, Bear and Garza will go to the Chatham County Sheriff’s Office to complete a four week explosives detection training program Garza said.

They will have to pass as a team to be certified Garza said.

Upon completion of their training, Bear and Garza will be assigned to the Armstrong campus, where they will perform daily patrols, as well as respond to reports of potential explosive devices or illegal weapons.

GS Chief of Police Laura McCullough spoke about Bear’s addition to the UPD force in a press release.

“We are excited to have Bear join our team and to be able to provide an extra measure of security to our Armstrong and Liberty campuses,” McCullough said. ”We want to ensure that we have resources available to provide a safe campus environment to all of the Georgia Southern campus locations. I am sure that Bear will quickly become an integral part of the University community and most likely one of the most popular members of our department.”

While Bear will be assigned to the Armstrong campus, Deimos will stay at the Statesboro campus.