“Blind Willie” McTell statue to be placed in downtown Statesboro 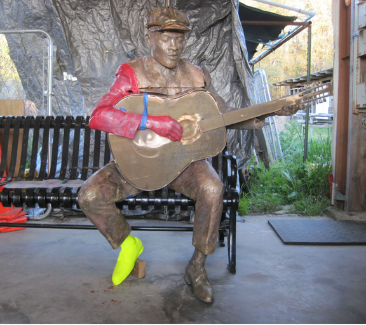 A statue of "Blind Willie" McTell will sit on the bench outside of the Statesboro Convention and Visitors Bureau in downtown Statesboro. The statue is expected to be completed this summer.

A statue of blues legend, “Blind Willie” McTell statue, is being constructed to sit on the bench outside the Statesboro Convention and Visitors Bureau.

“As part of the Blue Mile project and the America’s Best Communities contest, we wanted to highlight Statesboro creative and cultural past in a permanent and visible way,” Bob Mikell, Blue Mile Committee member said in an email.

The blues legend was born in Thomson, Georgia on May 5, 1903 and was blind either from birth or from early childhood, according to georgiaencyclopedia.org. McTell learned to play the guitar from his mother, relatives and neighbors in Statesboro, where his family had moved.

McTell played a twelve-string guitar and recorded more than 120 titles during fourteen recording sessions, one of which was blues classic Statesboro Blues.

The City of Statesboro and The Blue Mile selected Marc Moulton, Georgia Southern University Art Department Graduate Program Director, to construct the statue of McTell. The construction of the statues began in August 2016.

“One goal of the Blue Mile is to strengthen the relationship between Georgia Southern and the City of Statesboro,” Mikell said in an email. “Marc Moulton is an impressive artist but also a Georgia Southern professor and community member.”

The statue is expected to be complete by this summer. The Blue Mile hopes to hold a ceremony and celebration when the statue is unveiled.