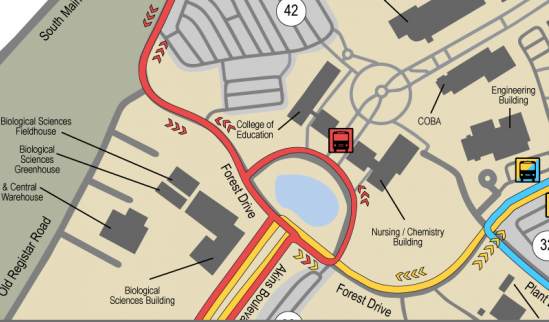 The Sweetheart Shuttle Route (red) will now stop at the College of Education before continuing to the Sanford Building stop on Sweetheart Circle.

The College of Education stop has been added to the Sweetheart Shuttle route following a proposal by the Student Government Association over Spring Break.

The new Sweetheart Shuttle route, introduced in March, came from a proposal by the Student Government Association. However, SGA President Dylan John said another proposal was made to Parking and Transportation over spring break to evaluate current bus routes and consider adding the stop to the new route.

According to a press release, after careful data compilation and consideration of student input, Parking and Transportation made the decision to re-incorporate the COE bus stop to alleviate full shuttles on the other routes.

“The initial proposal never suggested the removal of the nursing and education bus stop,” John said. “We’re very very happy to know that Parking and Transportation did kind of take a look at the proposal, evaluate the data and make the recommendation that it can be introduced without having to wait to long.”

The Sweetheart Shuttle route will continue to start from Paulson Stadium, but will make a stop at the Education Building before continuing to the new stop in front of Sanford Hall. The bus will then return to Paulson Stadium.

“We’re happy to accommodate our commuters by adding this stop as we continue to strive to make Southern Express the best possible experience for students traveling throughout the Statesboro Campus,” Kristi Bryant, director of Parking & Transportation, said in a press release.

For more information about Parking and Transportation, and for a map of all Southern Express routes, visit GeorgiaSouthern.edu/parking. Bus routes can also be viewed on the free SmartTraxx app.