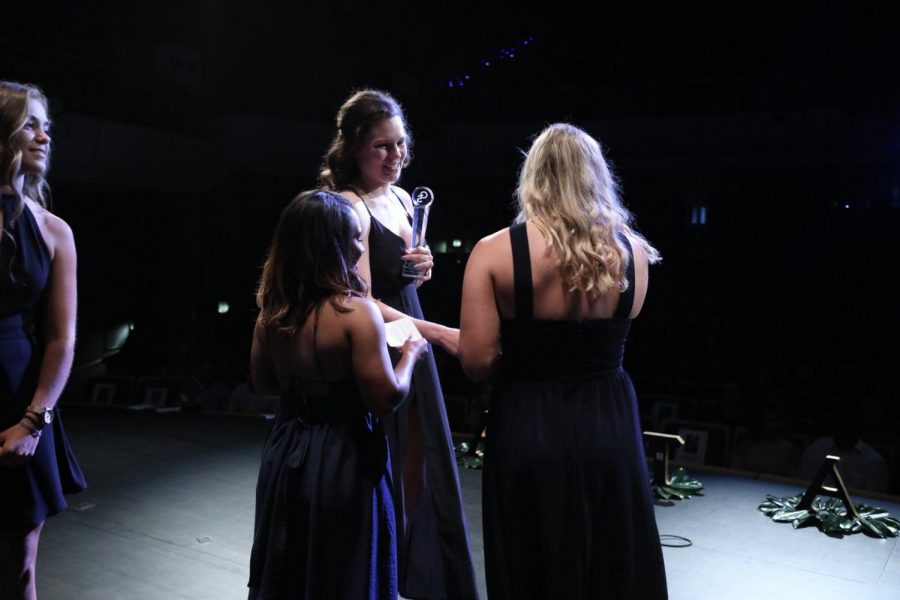 On Tuesday night, Georgia Southern student-athletes gathered in the Performing Arts Center for the first annual GUSPY Awards, which was the GS Athletics’ version of the ESPYs.

This was a night honoring athletes across all varsity sports for their performances on and off the field, court and pool. Student-athletes nominated the majority of the awards and then the Student-Athlete Advisory Committee (SAAC) voted on the nominees.

The ceremony was hosted by WSAV sports anchor Greg Talbot who wasn’t short of jokes, including a sly 28-3 Falcons Super Bowl joke.

The night began with a “blue carpet” walk through where all the athletes posed with Gus in front of a custom backdrop. Once everyone was seated, a video with Gus rounding up all the coaches played before the mascot made a grand entrance to the stage.

The first awards given were the strength & conditioning awards which awarded to the two athletes who improved the most in the weight room over the past year. Junior RHP Brian Eichhorn won the male award and senior volleyball player Joscelin Morrow won the female award.

One of the most sought after awards was the victory of the year, which had four very qualified nominees, but the winner was the men’s basketball victory over ACC foe Wake Forest.

Redshirt-sophomore linebacker Todd Bradley earned the biggest applause of the night winning the male comeback of the year. Bradley battled skin cancer and a torn ACL before starting in all 12 games last season for the Eagles.

Following the presentation of jackets and Eagle busts to four year letterwinners, Athletic Director Tom Kleinlein took to the stage to award the True Blue awards. The True Blue awards were given to two student-athletes who embody what it means to be a Georgia Southern Eagle and this year’s winners were golfer Jake Storey and swimmer Kaylyn Thomas.

After the True Blue awards were given out, it became the Tookie show with junior point guard Tookie Brown winning play of the year for his game winning three against Arkansas-Little Rock and the student-athlete of the year.

Talbott thanked everyone before a senior recognition video sent everyone home with a little bit of nostalgia and pride. The evening was a great event to honor and celebrate all the student-athletes have done for the school and the community.